Japan’s Yuta Ikeda had a weekend to remember at the Panasonic Open Golf Championship near Tokyo, shooting 66-65 to clinch the title by three shots over Victoria’s Marcus Fraser and Korea’s KT Kim.

The 30-year old showed his liking for the Chiba Country Club layout, where he had won the Japan Open in 2014, with a tremendous first nine holes of 29 on Sunday. 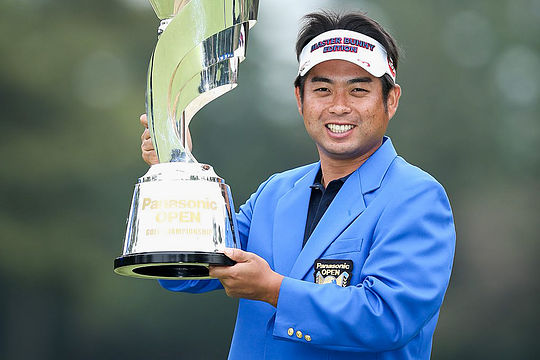 Both Fraser and Kim have been in-form players this season, Fraser having won in Malaysia and Kim again last week in Japan. However despite their best efforts, neither could peg back the margin over the rampant Ikeda who earned his 14th Japan Golf Tour victory in style with a four round total of 13-under 271.

Fraser’s US$115,000 joint runner-up cheque extended his substantial lead on the Asian Tour money list, this event being co-sanctioned between the Asian and Japan Tours.

“I needed to get off to a fast start and that didn’t happen,” Fraser said, “Yuta played nicely on the front and set himself up to win. I couldn’t keep up with him.”

“He played flawless golf on the front and deserves to win.”

Adam Bland, Brad Kennedy and Sam Brazel were the next best Australians in a tie for 28th place at 1-under, while Terry Pilkadaris was further down the field in a tie for 55th.

The Asian Tour now takes a short break before resuming in Mauritius in mid-May, however the Japan Golf Tour moves on this week to one of its most prestigious events – The Crowns – an event that has a celebrated list of past champions including Australians Greg Norman, David Graham, Brendan Jones, Graham Marsh (twice), Peter Senior and Roger Mackay.