There’s Hogan’s Bridge, Rae’s Creek, Sarazen Bridge and until last week Eisenhower’s Tree was also one of the most famous landmarks at Augusta National, the home of the US Masters.

Now the Eisenhower Tree is no more after the 100-year-old landmark was partially destroyed in an ice storm, prompting the club to remove it completely. 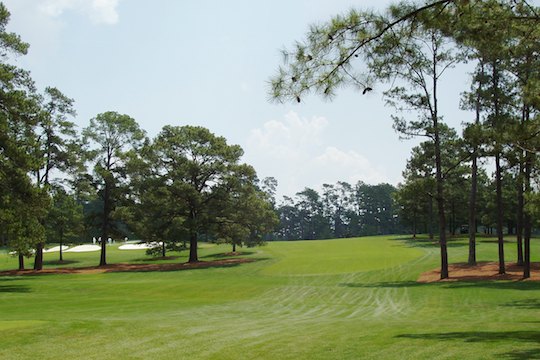 Ike’s Tree on the 17th hole at Augusta National

It has been one of the club’s most notable landmarks and even survived the efforts of former US President Dwight D Eisenhower to have it chopped down.

Amazingly, President Eisenhower campaigned with club officials in 1956, during his White House tenure, to have the massive pine, which waited to punish any wayward tee shots on the left of the 17th fairway, removed.

It seems ‘Ike’ became severely rankled with the tree that repeatedly intruded into his rounds at Augusta National.

His request was politely refused. Even the power Eisenhower wielded from the Oval Office could not sway his fellow golf club members.

In fact the tree then went on to become one of the course’s most famous landmarks before it was left in a sorry state after the severe weather that hit the Georgia area recently.

It will be missed.

Six-time Masters champion Jack Nicklaus said: “The Eisenhower Tree was such an iconic fixture and symbol of tradition at Augusta National. It was such an integral part of the game there.”

“Anything that lives will eventually die, I guess, and this one may be early,” he said.

“They have done a lot of work to keep it standing for a long time.

“It’s gone and it will be part of Augusta history forever.

“But the course has evolved over all these years with natural as well as man-made changes.

“It has taken on a lot of different looks over the past 10, 15, 20 years and now we’ve got another different look, and, you know, whether they replace it or not, it was a pretty tight hole.

“From a golfing standpoint, I kind of think seeing a little bit more of the fairway will be a nice thing.”

No doubt ‘Ike’ would have definitely agreed.