Mikko Ilonen completed a wire-to-wire victory as he celebrated his 300th European Tour appearance by winning the Irish Open at Fota Island Resort in Cork.

The Fin carded a final round of 70 to finish 13-under par, one shot ahead of Italy’s Edoardo Molinari, with Sweden’s Kristoffer Broberg and English duo Danny Willett and Matthew Baldwin another shot back in third. 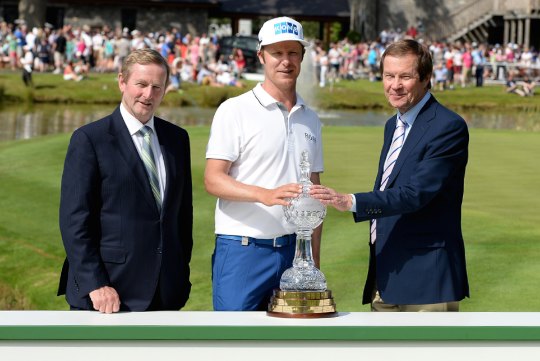 It was a big week for Irish golf with the Open showcasing homegrown stars in Rory McIlroy, Graeme McDowell, Darren Clarke and Padraig Harrington, the Amateur Championship being staged at Royal Portrush and the R&A announcing Portrush had been invited to join the Open rota from possibly as early as 2019.

Sadly, poor putting cruelled his chances and he had to settle for a tie for sixth, his first top-ten in 13 appearances in the event.

“Perhaps one of the worst putting weekends of my career when in contention,” said McDowell.

Ilonen’s victory was the second wire-to-wire effort in as many weeks on The European Tour after Martin Kaymer’s triumph at Pinehurst No.2, and the Finn admitted he had been inspired by The Ryder Cup hero.

“It was very much a Martin Kaymer-inspired win,” he said. “I sent a message to him last week that I really enjoyed watching golf. I very rarely enjoy watching golf; I would rather play golf, but Martin’s win inspired me. It was nice to keep that lead all the way.”

“I looked back on the 18th green and I couldn’t believe how many people there were. It’s nice to see – it was a very humble moment.”

Ilonen won the Amateur Championship at Hoylake in 2000 and was 16th in the Open there in 2006, so he is excited by the prospect of returning to Royal Liverpool for The Open next month.

“I’ve been thinking about it a lot since I qualified off the Order of Merit last year. I am looking forward to it and hope I can keep this run going.”

Molinari, Willett and Baldwin will join Ilonen at Hoylake after securing the three available places via the new Open Qualifying Series.

The European Tour heads to Germany next week where U.S. Open champion Martin Kaymer headlines the BMW International Open at Gut Larchenhof, south of his hometown of Dusseldorf.