Sadly, it seems 2019 was the last time we’ll see Ernie Els as the International Presidents Cup captain, at least for now, with the announcement of his replacement this week.

The PGA Tour named fellow South African Trevor Immelman to head the Rest Of The World against the US at the 2021 Presidents Cup at Quail Hollow Club in Charlotte, North Carolina. 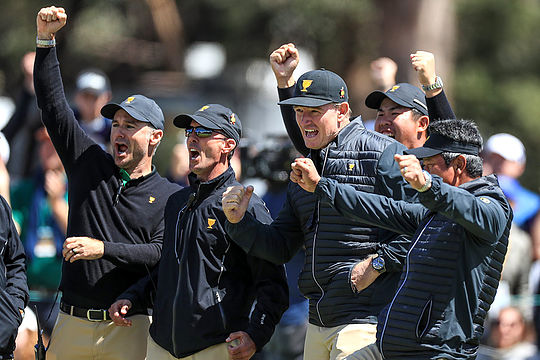 Trevor Immelman celebrates along with his co-captains and Ernie Els in 2019 (Credit: PGA Tour)

Immelman is no stranger to the tournament with stints as a competitor in 2005 and 2007 as well as a captain’s assistant alongside K.J. Choi, Geoff Ogilvy and Mike Weir under Els at the 2019 Presidents Cup in Melbourne, where they valiantly lost to Tiger Woods’ team, 16-14.

He previously captained the first-ever Junior Presidents Cup in 2017, narrowly falling again to the US, 13-11.

“In 2005, I played in my first Presidents Cup under captain Gary Player and being a captain now is an amazing honour,” Immelman said.

“The Presidents Cup and the PGA TOUR have been a massive part of my career, and so for me to now lead the International Team is something that is going to be one of the highlights of my career and something that am extremely excited about.”

“Trevor is universally respected in the world of golf, and he will receive immense support as he navigates this new and exciting challenge.”

“His love for the game and the Presidents Cup made him an ideal captain’s assistant for Ernie Els in 2019, and I know Trevor is eager to build on the momentum that Ernie and the International Team generated at Royal Melbourne this past December ,” said PGA TOUR Commissioner Jay Monahan.

The U.S. Team captain will be announced at a later date.