Charlie Dann has secured his second national ranking event title in as many starts adding the Keperra Bowl trophy after recently winning the Mandurah Open Amateur and in the process has gained a spot in this week’s Isuzu Queensland Open.

Dann, 24, fired rounds of 66-66-66-71 to finish at 19-under and three strokes ahead of Victorians Zach Murray and David Micheluzzi. Lawry Flynn finished in fourth position with Dylan Perry rounding out the top-5. 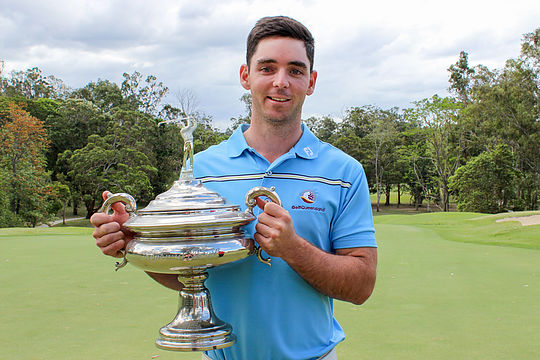 This season has been a standout for Dann having started back in January with a 3rd place finish at the Australian Master of the Amateurs, Australia’s highest ranked amateur event, followed by a runner-up finish at the Lake Macquarie Amateur.

“I was fortunate recently to get a spot in the QAS program and with the work I’ve been doing with my coach Grant Field, it’s all starting to fall in place nicely.”

“I’ve been committed to making the most of these opportunities driving one and half hours three days a week to attend QAS training having said to myself ‘I want to give this a real crack and see how far I can go’ and just push my boundaries.”

Many might consider Dann an ‘elder statesman’ of the elite amateur ranks, yet he remains unfazed about such reference and is committed to his goals moving forward.

“Yes, at 24 many might say I’ve left the run a bit late, but I look at it as being fresh and more mature to deal with the challenges,” says Dann who credits his parents Chris and Sonya as well as Patrick Jones, the local professional at Gympie, as being instrumental in getting him started in the game when he was 15.

“I’m continuing to get better and better and to me, that’s the main goal. I’m learning to balance coming off the highs with winning and keeping myself in the right space moving forward.”

Achieving the right “balance” certainly has been a factor behind Dann’s fine run of success. Having started a traineeship a few years back at Peregian Springs only to let that pass, Dann has seen both sides of the golfing world.

“I started a traineeship but then kind of hanged out for a few years before deciding to return seriously to the game and to focus on being a tour professional,” says Dann.

“My goals now are to get into uncomfortable positions more often where you have a chance to win tournaments, be that amateur or professional events. You need to experience that discomfort of trying to get into a winning position and being across the line.”

Dann’s next event is this week’s Queensland Open at The Brisbane Golf club, a venue where he hass tasted success during the recent Australian Interstate Team series.

“Brisbane is a course that suits my eye and I’m trying to get as many starts on the Australasian Tour as I can. It was great to get a win at Keperra and it gives me the confidence to move forward.”