South Korea’s Inbee Park captured Asia’s first Olympic golf gold medal when she completed a remarkable recovery from injury to underline her status as one of the modern greats of the women’s game.

The 28-year-old from Seoul recorded her third 66 at Reserva de Marapendi Golf Course in Rio de Janeiro to win the first women’s competition since 1900 by five shots from New Zealand’s Lydia Ko and by six from Shanshan Feng of China. 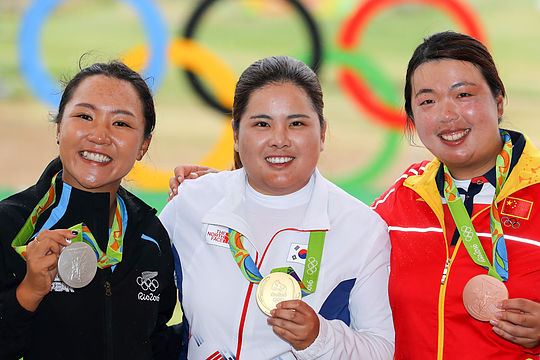 With Australian caddie Brad Beecher by her side, the seven-time major winner wowed the sell-out galleries with a brilliant exhibition, extending her two-stroke overnight lead into a commanding five-shot victory over world No.1 Ko.

Ko rolled in a seven-foot birdie putt on the 72nd hole for a 69 and a 273 total to claim the silver medal for New Zealand, with Feng matching Ko’s closing score to take the bronze on 274.

“This is definitely one of the special moments in my golfing career and in my whole life,” Park said. “It feels great. Obviously representing your country and winning the gold is so special.”

“This is something I’ve really been dreaming of coming into the week. There were so many Korean people out here supporting me and it almost felt like we were in Korea. Seeing how much support I had this week, I’m just happy that I finished well. This is definitely a big relief.”

Ko was equally emotional in taking out silver.

“I can’t believe I’m holding a medal on the podium, it’s what I’ve been dreaming about since 2009. To actually be there beside Inbee and Shanshan, is a dream come true.”

The final day spectacle was further embellished by Russian Maria Verchenova’s course record nine-under-par 62, assisted by a hole-in-one at the fourth, allowing her to climb to 16th place after earlier rounds of 75-70-73.

Australians Minjee Lee and Su Oh, while out of the medals, enjoyed successful weeks with Lee joining in on the hot final day scoring with a round of 67 to finish tied for 7th place at 8-under, with Oh shooting 70 to tie for 13th at 5-under par.