World number two, Inbee Park, discovered the deadly putting touch that had her on the verge of winning four-consecutive major championships in 2013, winning her second North Texas Shootout in Irving, Texas on Sunday.

Park won the inaugural event in 2013 and shot a flawless 6-under 65 on Sunday to win again, by three strokes over Cristie Kerr and Hee Young Park. 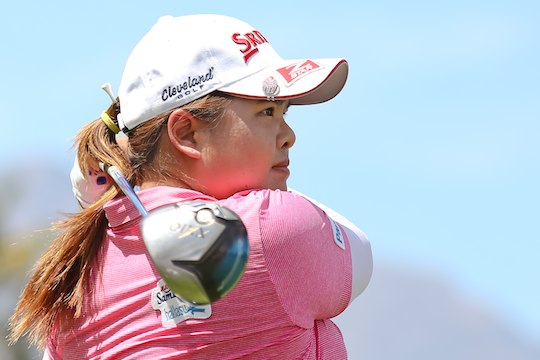 “I don’t know how I did it, but I did it twice,” Inbee said. “I love this golf course. It seems like it really suits my eye.”

Park never surrendered the lead after consecutive birdies at the second and third holes at Las Colinas Country Club, finishing at 15-under 269 for her 2nd victory this year and 14th on tour.

Kerr and Hee Young Park both closed with rounds of 66 to share the runner-up position.

“Can’t complain,” Kerr said. “I was great mentally. I thought I had to shoot at least 5 or 6 under to have a chance, and I did that.”

Lexi Thompson, who shared the third-round lead with Park, closed with a 69 to tie for fourth with Sweden’s Maria McBride (65) at 11-under.

The catalyst for Park to begin her march to victory came at the 9th hole, when she holed from long range for birdie to edge ahead of playing partner Thompson.

“That really got me going into the momentum, and that definitely gave me a lot of confidence on the greens,” Park said. “I thought maybe today is not the day for me on the putting because it didn’t want to go in on the front nine.”

Karrie Webb was the only Australian to play on the weekend and impressed with a blistering round of 64 on Saturday before by finishing in a tie for 7th place at 9-under, alongside defending champion Stacy Lewis and fellow Hall of Famer Juli Inkster. It was Webb’s best result of the season to date and her first top-ten finish since November last year.

It was also the first top-10 finish since 2011 for 54-year old Inkster, who will captain the American Solheim Cup team in Germany later this year.

17-year-old Canadian Brooke Henderson had another great week despite a final round 73 cruelling her chances to contend at the business end of the round. Henderson will certainly sleep well after enduring a long week of travel and weather nightmares before the tournament began, travelling from last week’s event in San Francisco then surviving a weather delayed qualifying round that took two days to complete just to get a start.

“It has been a long week,” she said. “I’m excited to sort of go and relax a little bit while I caddie for my sister in South Carolina. But it’s been a lot of fun and I wouldn’t change it for the world.”

The LPGA travels to the East Coast in a fortnight’s time for the Kingsmill Championship in Williamsburg, Virginia.