World number one, Inbee Park, has joined the legendary Babe Zaharias (1950) as only the second player in LPGA history to win the first three majors in a season, following her dominant four-stroke victory over I.K. Kim on Sunday at the US Women’s Open.

With an Australian connection in Brad Beecher on the bag, the 24-year-old South Korean fired a final-round 74 at the Sebonack Golf Club outside New York to finish at 8-under-par 280 for her fourth major win and second US Open title. 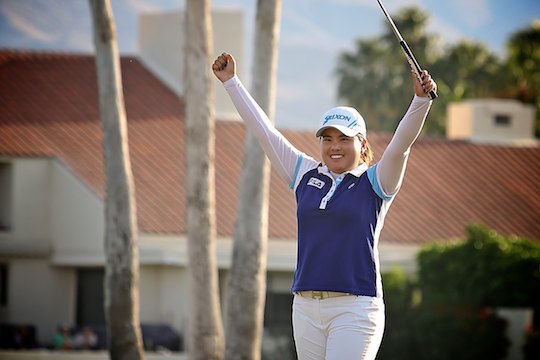 Sunday’s victory places Park in rarified air and a chance to create history by becoming the first professional – male or female – to win four majors in a season. Only Mickey Wright (1961-62) has won four consecutive majors on the LPGA Tour but no player has done it in a single season.

Tiger Woods is the only male to win four-consecutive majors across two seasons, 2000-2001.

And could there be a more perfect stage in the world of golf for this tilt at history than the most historic course of all – the Old Course at St Andrews – host of the Women’s British Open in early August?

“I am just very honoured to put my name by someone like Babe Zaharias,” Park said, “I don’t know what I just did today; it’s something very great. It’s scary to think about what I am capable of doing.”

Opening the day with a four-stroke lead over I.K. Kim, Park made the turn in 1-over-par 36, but extended that lead to five shots as Kim fired 2-over-par 37 on the same nine.

A birdie by Park at the 10th hole extended the lead to six shots before back-to-back bogeys at 14 and 15 reduced the lead four with three holes to play.

However, Park never looked like giving her compatriot an inch over the closing holes by playing her error-free brand of ‘fairways and greens’ golf to sew up the win and the $585,000 first place cheque.

Kim finished alone in second place at four-under with 2011 champion So Yeon Ryu completing a Korean trifecta by finishing third at one-under.

“I really want to enjoy the moment as it is in the moment,” Park said, not wanting to get too far ahead of herself, “I mean, (a) grand slam is very big. I probably wouldn’t get this kind of opportunity ever again. ”

“I’m just glad that I can give it a try at St. Andrews,” she continued, “That’s going to be a great experience. Whether I do it or not, I’m just a very lucky person.”

Australia’s Karrie Webb was once again the best of the Australians but was never seriously in the hunt, finishing in a tie for 13th place at five-over par.

Kiwi amateur Lydio Ko finished tied for 36th while the only other Australian to survive the cut, Sarah Jane Smith, finished back in the field at thirteen-over, in a tie for 46th.