A red-hot Shubhankar Sharma of India fired 10 birdies for a remarkable 10-under-par 62 to claim a stunning two-shot victory at the US$3 million Maybank Championship on Sunday.

At the age of 21, the talented Indian overcame a four-shot deficit with a dominant display to clinch his second Asian Tour and European Tour title with a winning total of 21-under-par 267 in windy conditions at the Saujana Golf and Country Club.

In his fourth start since winning the Joburg Open in South Africa in December, Sharma produced a sensational final round where he made five birdies in each half which included clutch birdie putts on 17 and 18.

He defeated co-overnight leader Jorge Campillo of Spain, who eagled the opening hole before returning with a 68 to settle for second place, while Pablo Larrazabal and Ryan Fox of New Zealand finished in third place after posting identical 66s. 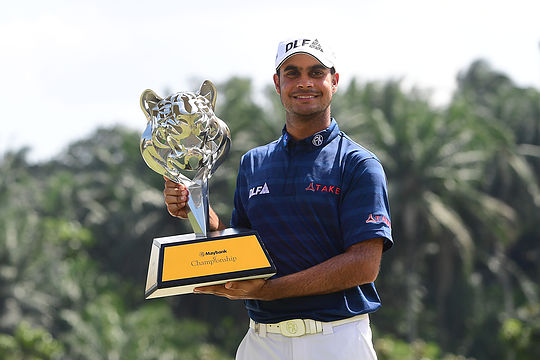 Khalin Joshi of India, who is Sharma’s roommate this week, finished in a share of fifth place alongside Japan’s Ryo Ishikawa, Hideto Tanihara, Nino Bertasio and world number 47 Dylan Frittelli of South Africa.

The victory earned him US$500,000 and moved him to the top of the Asian Tour’s Habitat for Humanity Standings and on the Race to Dubai on the European Tour.

Andrew Dodt (T55) and Jason Norris (70) were the only two player to make the weekend cut.