Shubhankar Sharma fired a closing 69 to win his first European Tour title at the weather-delayed Joburg Open, co-sanctioned with the Asian Tour.

The Indian entered the final round with a five-shot lead but had seen that reduced to four when play was halted due to storms at 1pm local time on Sunday when he was playing the eighth green. 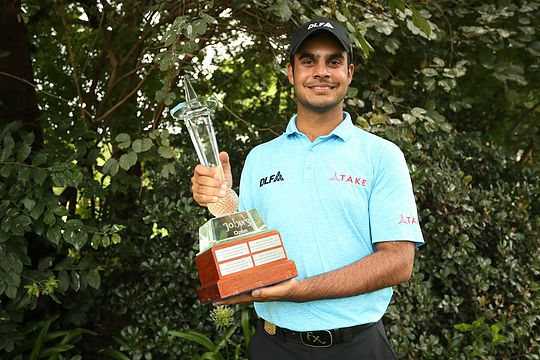 The following day Sharma came out firing, birdieing the ninth and then parring his way home to finish at 23-under and a three-shot victory over South Africa’s Erik van Rooyen.

“I was really calm once I got going, I just stuck to my game-plan and kept saying to myself to be aggressive, I never wanted to defend my lead. I set myself a target of finishing 25-under, but 23-under will do. I just kept imagining that I was three shots back,” said Shubhankar, about his first victory outside India.

“It feels fantastic,” said Sharma. “I’m glad I made the decision to come here. Initially, I was thinking of giving this tournament a miss. It has been absolutely fantastic and the people are very welcoming.”

“I don’t think I will ever forget this week. This is my first win on the Asian Tour and the European Tour so it means a lot to me.”

Sharma’s Joburg Open win highlighted a highly successful season for Indians on the Asian Tour. It was the sixth win by an Indian on the Asian Tour this year and Sharma became the fifth Indian golfer to win on the tour during the current season.

The Indians who have won titles on the Asian Tour previously this year include Shiv Kapur, who has won twice, SSP Chowrasia, Gaganjeet Bhullar and Ajeetesh Sandhu.

South African Shaun Norris made a late charge to rip through the field with a closing 65 to finish tied for third with Finland’s Tapio Pulkkanen.

A place at the Open Championship was on offer for the top three players in the field not already exempt and Norris joined Sharma and Van Rooyen in booking his place at Carnoustie Golf Links as he finished at 17-under alongside Finn Tapio Pulkkanen.

Jake Higginbottom was the best of the Australians finishing in a tie for 27th position at 9-under, followed by Terry Pilkadaris at 3-under.

Scott Barr missed the cut along with Marcus Both and Jack Munro.