Firing two rounds of 4-under 68, Campbell leads the tournament by one shot over compatriot Michael Long. 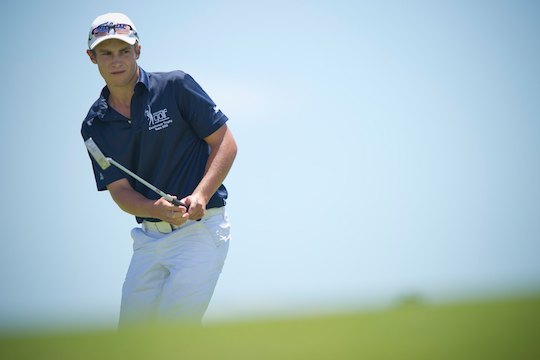 “It was a bit scratchy today but I holed out from about 65 meters on number 10 which was nice and went bogey free which was also good,” said Campbell who is aiming to qualify for the PGA Tour of Australasia for the first time.

“I hit some of the best bunker shots I have in a long time today, probably didn’t hit that many greens, only 10 or 11 for the round, so I scrambled really well and putted really well.”

The 23-year-old Professional has been hampered by a reoccurring undiagnosed chest injury but played through the pain to put together two solid rounds.

“I have had it since May and no one can work out what’s going on,” added Campbell, who was seeking treatment this afternoon.

“I have had two MRI’s; I’ve had x-rays, multiple blood tests and seen many people about it. It’s a tricky thing when no one knows what’s causing it, if its gland related, if it’s not.”

“It could be anything, it doesn’t seem muscular it’s perhaps more through my ribs.”

“It really hurt warming up hitting driver, so I actually didn’t hit any drivers out there. I just played within myself and tapped it around.”

Competing on the Victoria Golf Club on the Melbourne Sandbelt has been the key to Campbell’s success so far.

“I really like this course, its treated me pretty well in the past,” added Campbell.

“It’s always nice when you’re not feeling comfortable to be playing a course that you do feel comfortable around.”

With two rounds to go Campbell is confident of reaching his goal for the week.

“You need to keep the hammer down, it’s a course where someone can easily come out and shoot 8-under,” added Campbell.

“I made a goal to get a goal to 12-under for the week so that is well and truly in sight and easily doable.”

“Winning is what we all came out here to do, I’ll definitely try and win it.”

Sitting two shots off the pace and tied third are Ed Stedman, who fired a 6-under 66 today, and Leigh McKechnie.

Rounding out the top-5 on 4-under the card are Brad Shilton, Blake McGrory and amateur Todd Sinnott