World number one, Rory McIlroy, looks unlikely to contest this week’s Scottish Open and the 26-year old must be in serious doubt to defend his Open Championship next week at St. Andrews.

McIlroy posted the injury overnight on Instagram and looked a sorry sight standing with the aid of crutches after rupturing ankle ligaments while playing a friendly game of soccer. 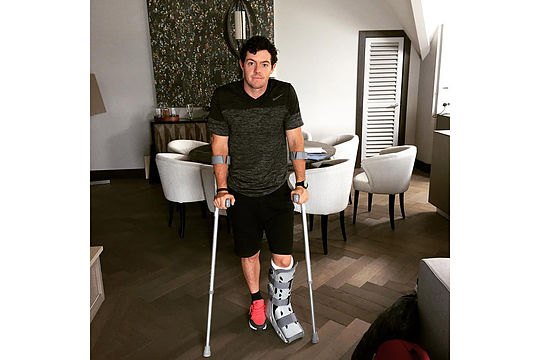 “Total rupture of left ATFL (ankle ligament) and associated joint capsule damage in a soccer kickabout with friends on Saturday.”

“Continuing to assess extent of injury and treatment plan day by day. Rehab already started….. Working hard to get back as soon as I can,” said the four-time major winner on Instagram.

McIlroy, who has won four majors, was set to play in the Scottish Open this week, but will definitely miss that event. He could also miss the chance to defend his US PGA Championship title in mid-August.

Tweets from fellow golfers with similar injuries have suggested that McIlroy could be out of the game for as long as three months, which would also put his defence of the PGA Championship in doubt.

Let’s hope for our sakes he gets back in to shape to go up against Jordan Spieth in his quest for the Grand Slam. A duel we all want to see happen.