A mood of sadness has passed over the Emirates Australian Open as an icon of the game announced his retirement.

With his son Mitch on the bag and wife June by his side, Senior departed the golf course, injury having ravaged his body.

“It’s a tough one to swallow I have been out here for nearly 40 years and have enjoyed every minute,” said Senior. “To see it come to an end you look back on its pretty disappointing to finish this way.”

It’s been an incredible career spanning almost four decades with Senior providing plenty of thrills for Australian fans along the way.

Senior has won 34 career titles all over the world including 23 on the PGA Tour of Australasia, four on the European Tour and three on the Japan Tour.

Senior is the only player to have won the Australian PGA Championship in his 30’s, 40’s and 50’s. 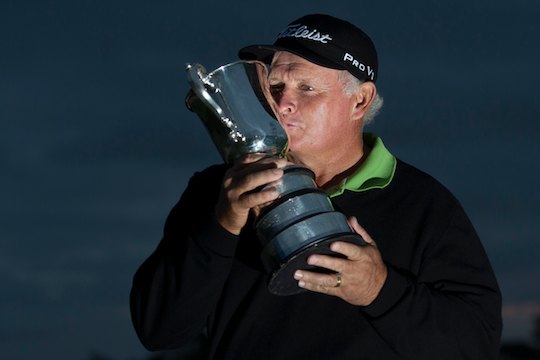 Peter Senior, winner of the 2012 Australian Open at The Lakes (Photo: Anthony Powter)

In 2012, at the age of 53 he stunned the field to win the Emirates Australian Open as wind gusts blew over TV towers at The Lakes.

Just three years later, Senior won the Australian Masters; he is the oldest winner of both Championships.

For all his accolades, Senior’s fondest memories from his career will be of the people he has met along the way.

“The golf’s fantastic no matter where we play. It’s the people surrounding the golf who have been fantastic,” added Senior. “The PGA guys and girls, all the tournament directors I have got to know, it’s sad that we won’t be getting together again.”

While this is a sad day for Australian golf, Senior believed the future of the game is in safe hands.

“So I think in the next three or four years of Australian golf will be pretty good.”

In a final word from Peter Senior, he thanked his fans.

“I really appreciate all the support,” added Senior.

“I cannot believe how many people come down to see me in the later years of my life and the wins I have had recently on the Australian Tour.”