Tiger Woods played a nine-hole practice round revealing it was a newer injury in his lower back that was the cause for him withdrawing after nine holes of last week’s defence of his WGC – Bridgestone Invitational.

He walked from the Valhalla ninth hole, and his first appearance on the course since winning the 2000 PGA Championship indicating the Sacrum bone in his lower back dislodged and pinched a nerve in falling backwards into a bunker during the early stages of last week’s final day in Akron, Ohio. 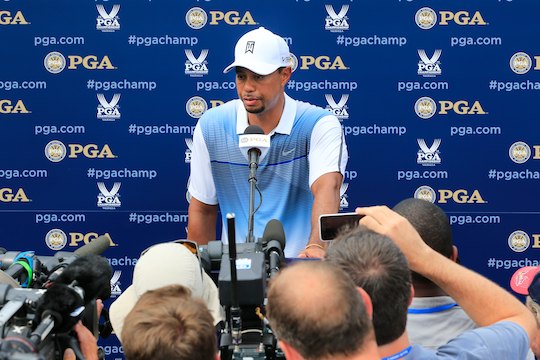 Tiger Woods talks to the media after his first practice round at the 2014 PGA Championship (Credit: www.golffile.com)

In humans, the sacrum is a large, triangular bone at the base of the spine and at the upper, back part of the pelvic cavity, where it is inserted like a wedge between the two hip bones. Its upper part connects with the last lumbar vertebra, and its lower part with the coccyx (tailbone). Usually, it begins as five unfused vertebrae which begin to fuse between the ages of 16–18 years and have usually completely fused into a single bone by the age of 34 years.

“Basically when I landed in that bunker my sacrum went out and just pinched the nerve and hence the spasms,” he said.

“The physio put it back in and with my physio here, so it can only get stronger but I’m alright while the treatment has been fantastic and once the bone was put back in I was good.”

Woods had been in an enormous amount of pain on Sunday and with those watching on in the car park of the Firestone Club questioning as whether this latest injury to the American may sideline him for the rest of the season.

But like so many other occasions in his career, Woods surprised everyone by insisting his back was now fine.

“It was a different pain to that I had been experiencing earlier this year and it wasn’t at the site of the surgery,” he said.

“It was different and it was just the sacrum.”

“So once the bone was put back in I felt good. So it’s all good. The inflammation has gone down as you saw out there I’ve got my speed and I’ve got my power.”

“So I decided yesterday I would play this week as my range of motion was good and my firing sequence was back to normal, so everything is all good.”

And Woods also had a message for USA Ryder Cup captain Tom Watson declaring when asked if he could win this week: “Yes and I can do that if I make every putt.”

And while Woods said he’s non on any pain-killers he has been prescribed anti-inflamatories.

And after speaking with the media he walked the back nine ahead of his tee off Thursday.