With the inspiration of Adam Scott, Brett Rumford will be looking to achieve something never accomplished before by an Australian on the European Tour and that is to win three Race to Dubai tournaments in succession. 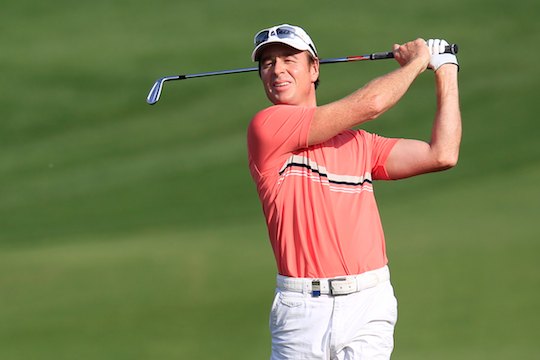 The Perth-born golfer had won a week earlier in winning the Ballantine’s Championship and his third career Tour success was inspired by the success of Scott in capturing last month’s Masters.

“I got a couple of text messages from Scotty (Adam Scott) which was fantastic, and he said to me how really proud he was for me,” said Rumford.

“His effort in winning the Masters was the inspiration for me and every other Australian competing around the world.”

Not since Nick Faldo in 1983, and Seve Ballesteros three years later, has anyone captured three European Tour events in succession but to do so he may have to overcome the likes of match play specialists Ian Poulter and Graeme McDowell, who are present in Bulgaria along with a stellar field assembled for the 48th edition of the World Match Play.

Rumford, though, admitted it has been somewhat of a whirlwind since those victories, including his twin girls’ second birthdays, and is modest about his chances this week.

“I’m really looking forward to the week,” said Rumford, whose victory in Tianjin saw the Perth native qualify for this week’s event. “I have just been trying to get my recovery back and my stamina to be able to take on 36 holes a day for obviously the duration of the event, hopefully, if I can make it that far.

“But knowing that my preparation has not been the greatest, I’m realistic.”

The five-time European Tour winner also revealed it would be his first competitive match play outing as a professional, having not contested in the popular format for 15 years.

After being drawn against Spaniard Gonzalo Fernandez-Castano and Welshman Jamie Donaldson in the round-robin group stages, he said: “I played plenty of match play as an amateur but I haven’t played match play since I was probably 20 years of age; so a long, long time now.

“But I really enjoyed match play when I was younger. I thrived on the competition, and obviously the head to head battle, and I like to think of match play as a learned game, as well.

“It’s very difficult early on to play an experienced match play player, anyway, because it’s a completely different mind set but I’m sure I’ll find my feet once I get into it.”

Rumford, who has talked a lot in recent times of how compatriot Adam Scott’s maiden Major triumph at the Masters Tournament last month helped inspire his recent success, also told of some messages he had received in return from the Adelaide man.

“I got a couple of text messages [from Scott] which is fantastic, and just one that he said, ‘I woke up this morning and I saw the results and I’m just thrilled to bits, I’m just really proud of you and it’s really inspiring stuff.’

“And it was just purely his performance in the Masters which pretty much inspired me to my wins so that was great.”

Moreover, though, Rumford credits the upturn in fortunes that has recently seen him claim his first wins since 2007 to old-fashioned grit and grind.

“I changed caddies and I’ve been working very, very hard with obviously just with the preparation side with Ronnie. I also changed coaches to Pete Cowen and have been working hard on the body, as well, with Kevin Duffy from Duffy Golf Fitness.

“So I’ve basically got my body and nutrition side right as well; it’s the whole lot. Just preparation, everything, and as well as home the hours I’ve been putting in – it’s some long days. More holistically, I’m just preparing a whole lot better.”

With his mind and body ready for the epic challenge ahead at Thracian Cliffs, Rumford could indeed be one to keep a close eye on as he seeks a place amongst The European Tour’s history-men.

And while Rumford is assured of making his debut later this year in the PGA Championship at Oak Hill in upper New York State, he’s well placed also in qualifying for only a third (British) Open Championship.

Rumford currently heads the Race to Dubai money list with earnings this year of Euro 811,807 and can be assured of a Muirfield tee time if he’s among the leading five money-earners at the June 9th end to the French Open.