Internationals keep the pressure on at Royal Melbourne

The morning session of day three of the Presidents Cup saw the Internationals keeping their noses in front of the Americans with a solid combinations within the Four-Ball resulting in a 2½ to 1½ gain in the points standings.

The second match went to the Internationals with Sungjae Im and Abraham Ancer accounting for Xander Schauffele and Patrick Cantlay with a 3&2 victory. Hideki Matsuyama and C.T. Pan were too strong for Patrick Reed and Webb Simpson recording an impressive 5&3 win.

The last morning match resulted in a tie between the pairings of Adam Scott and Byeong Hun An with the team USA of Matt Kuchar and Tony Finau.

The last time the International Team recorded 2½ points or more in each of the first three sessions was in 1998 when they secured their one and only winning title at the Presidents Cup.

The afternoon Foursomes proved a more stern encounter for the locals with the American pairs applying the pressure when it was needed, at one stage looking to collect all the afternoon matches. 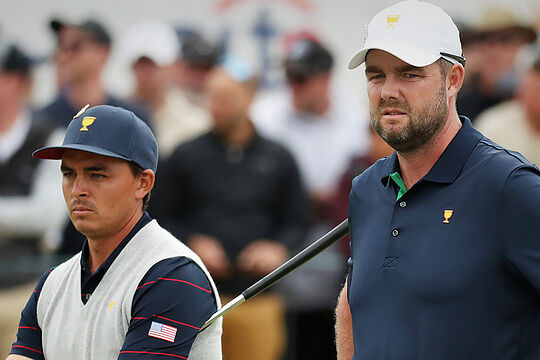 Then Aussie Marc Leishman and Abraham Ancer overcome a 5-down deficit through 10 holes to tie their match with Justin Thomas and Rickie Fowler. Byeong Hun An and Joaquin Niemann also tied their match with Matt Kuchar/Tony Finau to give the Internationals a combined point.

The Americans were too strong in the other matches with Dustin Johnson and Gary Woodland accounting for Louis Oosthuizen and Adam Scott, 2&1 as well as Xander Schauffele and Patrick Cantlay defeating Cameron Smith and Sungjae Im, 2&1.

Neither team has come back to win the Presidents Cup after trailing heading into Sunday Singles. The International Team held a three-point lead in the 2003 Presidents Cup that concluded in a tie.

Royal Melbourne was again spectacular, showing why it is one of the world’s best layouts. Tomorrow history could be again made with the Internationals seeking its first Presidents Cup victory since winning at The Royal Melbourne Golf Club in 1998.