In some of the toughest conditions ever at Royal Melbourne, Aaron Baddeley and Jason Day held off a determined Tiger Woods and Dustin Johnson paving the way for the International team to split the six Friday four ball matches.

It was a day of high winds, tension and endurance as the Internationals showed steely resolve clinching three vital matches to rebound back in this Presidents Cup. 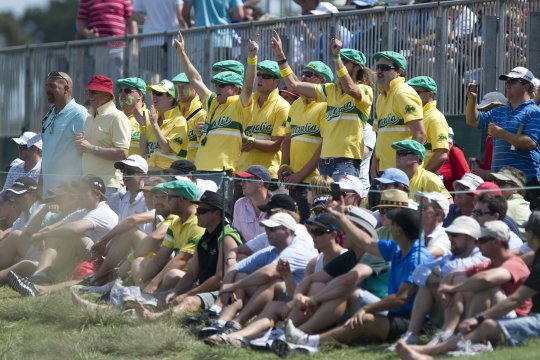 The United States still leads the tournament 7-5, yet it was the Baddeley & Day 1-up win over Woods & Johnson which the Internationals needed.

Baddeley made a 25-foot birdie putt on the 13th to go 1 up, and Woods & Johnson couldn’t catch up. They just didn’t have enough birdie chances and when they did, they couldn’t make them.

“Just trying to hit the greens, that was a heck of an accomplishment,” said Woods.

“Wedges weren’t holding, balls were oscillating on the greens, you’ve got to play the wind on putts. It was a tough day.”

Entering the second day with a 4-2 match advantage, USA came out of the blocks early as Web Simpson and Bubba Watson secured the first match with a 3&1 win over Ernie Els and Ryo Ishikawa.

The north wind is considered the toughest at Royal Melbourne. Royal Melbourne’s greens also have considerable slope and most are elevated making for a challenging combination when it blows.

Ernie Els, a multiple winner at Royal Melbourne, said it was the fastest he has ever seen the greens because of the heat and wind.

Officials had not cut the greens overnight, fearful of wind blowing golf balls all over the place.

A wise decision, nobody wanted to see a disaster unfold like in a previous Australian Open a few year’s back at a near by course, where players refused to play because it was like putting in your bath tub.

Norman, who knows Royal Melbourne as well as anyone, later poured water on the 18th green to drive home just how hard it was. The green repelled the water down the slope like water off a duck’s back, none of it absorbed into the firm turf.

Australia’s Geoff Ogilvy combined with Korean KJ Choi to claim the second International win as they edged Bill Haas and Nick Watney, 1-up.

Australia’s Adam Scott, who with partner KT Kim of Korea went down 2&1 to Phil Mickelson and Jim Furyk. Matt Kuchar and Steve Stricker then defeated Robert Allenby and YE Yang 4&3.

Saturday sees a double session of Foursome and Four-ball matches with 10 points at stake.

Woods is 0-2 for the first time ever in this event, and the first time in any team competition since he and Phil Mickelson lost their opening two matches at the 2004 Ryder Cup.

The state of Woods’ game was tough to measure, as was the case with any other player.

The northerly wind was testing. On a sand belt course with fast greens, the most telling statistic was that 13 holes in the six matches were won with pars – an unusual statistic in the better-ball format.