With all the trash talk regarding Patrick Reed’s recent ‘indiscretions’ at the Hero Challenge taking the headlines, it is perhaps little wonder the Internationals were able to take the upper-hand with a 4-1 lead on day one of the Presidents Cup in Melbourne today.

And it’s not a good sign for Team USA, as the last time they trailed the Internationals at Royal Melbourne, it was the first and only time they have lost the Cup.

It was of course Tiger Woods who was capturing the imagination of all fans young and old, however, the Internationals wanted none of that and made sure they delivered the goods.

“The golf was excellent. A lot of birdies going out. There were chances for the guys, but then I was really proud of my team making those big putts on 17 and finishing with some very tight pins.” 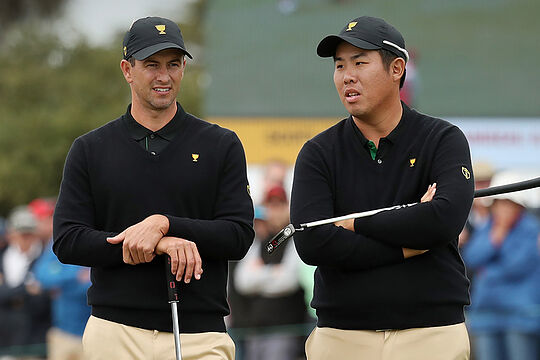 “We’ve got a long way to go, but this is an unbelievable start. We’ll celebrate this little session victory, and then we’ve got a couple more to go.”

Woods, who is only the second playing captain in Presidents Cup history, continued to bring his good form to the table and won his opening match alongside Justin Thomas 4&3 over Marc Leishman and Joaquin Niemann.

“It was important for us. J.T. and I went out there and partnered up well. Got off to a quick start and got up on them early, and kind of held on from there,” said Woods.

“This is a long four days. Just because we lost the session doesn’t mean the Cup’s over. There’s a long way to go. A lot of points available. The guys will regroup, and we’ll come out tomorrow ready to go.”

In his ninth appearance for the Internationals, Australia’s Adam Scott, paired with South Korea’s Byeong Hun An, to claim a 2&1 win against Presidents Cup debutants Bryson DeChambeau and Tony Finau. The South Korean was a late replacement for Jason Day, who succumbed to a back injury in preparation for the tournament.

“There’s a lot of buildup and I’m trying not to put pressure on myself,” said Scott

“It’s important playing here in Australia, but we did a nice job today. Ben had me covered early while I was shaky. After a couple holes, I settled down and hit some shots. It was good fun.”