The win caps off an impressive ‘down-under’ summer for Howard with a top-5 finish at our highest world ranked amateur event, the Australian Master of the Amateurs, a top-15 at the Lake Macquarie Amateur and making the match play segment at the Australian Amateur. 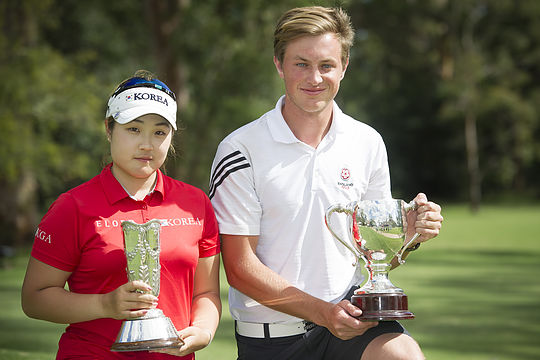 “It’s nice to get a win to take back home,” said Howard, ranked 14th in the world.

“I’ve enjoyed playing in Australia and really enjoyed the Master of the Amateurs at Royal Melbourne and to win in my last event tops off a great tour for me.”

Howard did not have it all his way during the 36-hole final against Micheluzzi, with the Victorian leading for most of the final before Howard took a gamble on Avondale’s 303 metre 17th driving the green to win the hole and be all square going down the last.

“That drive swung the momentum for me,” said Howard.

“Winning that hole got me back into the match for the first time and the timing was critical. Ultimately, that’s what I see as the turning point for me.”

When Micheluzzi flew the green on the first play-off hole and Howard played basic fairway and green golf, the championship had turned.

“He had a hard up-and-down and I was safely on the green for two,” said Howard.

“I was just able to apply the pressure at the right time to come away with this win.”

Cameron Davis, who won the Australian Amateur title the week before, was firm favourite to take back-to-back victories and entered the match play segment as the number 1 seed. Davis progressed to the quarter finals before being disposed of by Brayden Peterson, 1-up.

Peterson’s tournament would come to an end with Micheluzzi defeating him, 3&1, in the semi-final.

Earlier Howard had accounted for Andrew Tharle, 4&3, and Nicholas Curnow 2&1.

The women’s championship was dominated by the Korean team, most of whom had stayed in Australia following the Astor Trophy in Adelaide.

Dun-Bin Lin beat Celina Yuan on the 19th to reach the final, with Eun Jeong Seong accounting for Eunice Kim on the 19th to set up her final appearance.