At Castle Hill, Ricordeau defeated Breanna Gill and Rachel Hetherington of Australia after the trio had tied with 4-under par rounds of 70. Gill was eliminated at the first playoff hole before Ricordeau triumphed with a birdie over Hetherington at the third attempt. 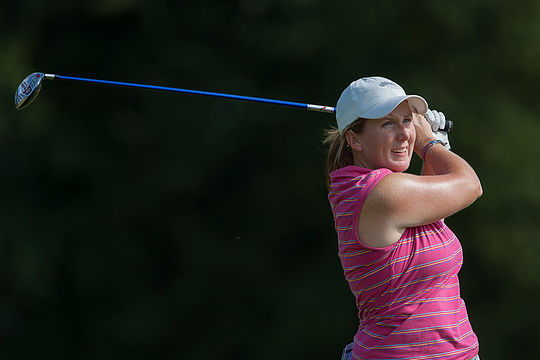 28-year old Ricordeau was delighted to win an event sponsored by Renault, saying: “This win is even more special as a French company is the sponsor, and I drive a Renault at home in France.”

The following day, American Beth Allen captured her first ALPG title at the Pennant Hills ALPG Ladies Pro-am, once again in a three-hole playoff over two Australians – Victorians Stacey Keating and Su Oh, who has recently turned pro after a glittering amateur career.

After the trio posted excellent rounds of six-under par 67, they headed to the par-three 18th to decide the title. Oh was eliminated at the first attempt and both Allen and Keating parred the hole the second time around. At the third attempt, Allen holed for birdie from eight feet to take the title.

“I’m excited, it was a good day and it was fun to win in a playoff, even though it was with one of my good friends.” the San Diego native said.

The wins will aid both Ricordeau and Allen in their bid to qualify for the ISPS Handa Women’s Australian Open through the ALPG Money List.

“That’s my goal. Royal Melbourne is my favourite place in the world, I came out early just to be sure I have every chance to qualify.” Allen said.

The 13th Beach Golf Links at Barwon Heads plays host to the Oates Victorian Open from Feb 5-8 where the event will again be played concurrently with the men’s Victorian Open over the club’s Creek and Beach layouts.