Newly-crowned Saudi Golf Tour Commissioner Greg Norman remains determined his breakaway golf league will be up there with the sports giants in the NFL, NBA, NHL and IPL cricket when launched next year.

Norman had been due to attend a Zoom conference call following Thursday’s Pro-Am ahead of today’s starting three-day QBE Shootout at the Tiburon course in Naples, Florida. 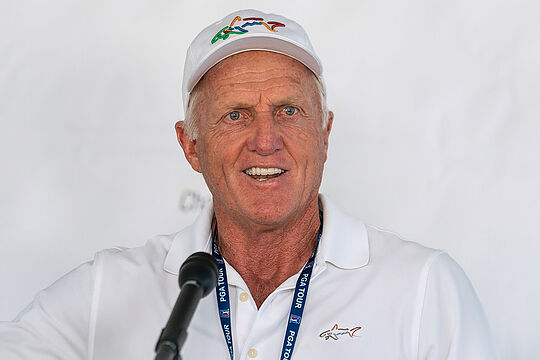 Greg Norman faces the media ahead of his own QBE Shootout (Credit: PGA Tour)

However, you could argue it was a timely internet breakdown just minutes ahead of Norman facing the on-line media that meant the golfer known as the ‘Great White Shark’ missing out on a possible mauling at the hands of the media.

Norman last faced the media in October in what was a selected gathering of user-friendly journalists in New York where he was formally confirmed as Tour Commissioner of the Saudi backed Golf League.

Those on the Zoom call were first advised Norman was on the last hole of his Pro-Am and it would be a matter of minutes before he was available.

However, the six of us on the Zoom call waited and waited until finally the Tour media official indicated that the internet was ‘down’ across the entire Ritz Carlton property.

Norman fielded just one question of a Saudi nature and that was about his confidence going forward with his new venture.

He said: “Look, what we’ve done already is an indication of our commitment to the game of golf through the Asian Tour investment.”

“I can’t remember the last time anybody wanted to come out and invest a couple hundred million dollars into an Asian tour, a tour in general, from the outside. I think that’s a testament to our commitment of where we want and how we want the game of golf to grow.”

“You know, Asia, I’ve been going to Asia for 40-plus years. I still go to Asia through my golf course design and through my consumer products and I see what has been needed there. I see the development of the game of golf, and all through the Pacific Rim there, specifically Vietnam. I see it in Thailand, I see it in Singapore, I see it in Japan.”

“We’ve got Hideki Matsuyama, who used to be the Asian amateur, now the U.S. Masters champion. I just want to be able to allow these players more of an opportunity to get the growth and the development they do need to be where they want to be, be a Hideki Matsuyama coming through the Asian ranks and coming up and winning a major championship let alone the U.S. Masters.”

“You know, I’m very, very passionate about that. I’m not going to lose focus on that at all. I stay finely tuned with my C-suite people on the same thing about our future and about how we want to get to certain milestones in our life and obviously for our investors.”

“They’ve invested for a reason, they invest for a reason because they see golf and sport as an asset class now and you’ll see it all around the world, whether it’s in IPL cricket or whether it’s even the NFL, NBA, NHL, you see it in all different leagues, people invested in sport in general.”

It remains to be seen whether or not the Saudis can become a power in world golf but with Norman on board at least they stand a fighting chance.