Interstate Series gets underway in SA

The Australian Men’s and Women’s Interstate Teams Matches get underway this week in Adelaide with the cream of Australian amateur golf doing battle for both state and individual pride at the West Lakes and Royal Adelaide Golf Clubs. 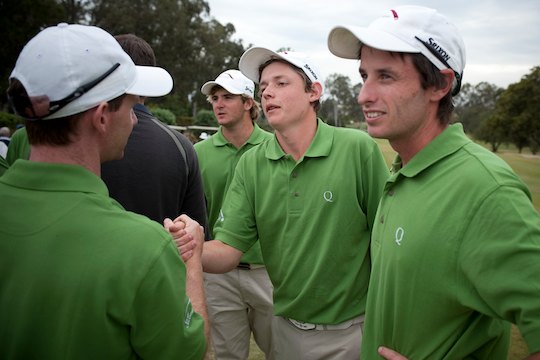 Queensland has dominated the men’s tournaments in recent times winning the last two series and have returned with a star-studded team headed by Daniel Nisbet, Cameron Smith, James Gibellini and Daniel McGraw.

Victoria is another team packed with talent and has a great history in this event with dual wins in 2008-09 to be another firm favourite for these series along with Queensland.

Tuesday’s opening round has Queensland against Victoria with the match promising to be a corker with the winning team securing vital first round points and the advantage of gaining the momentum over the other.

New South Wales last won the series in 2007, the team’s third successive win after collecting the title in 2005 & 2006, and is another favourite for the title.

New South Wales is a team that will challenge Victoria and Queensland and following a period of rebuilding they are a team which should not be discounted at these series.

Drewitt is a true match play exponent, having won the NSW Amateur in March to add to his 2010 Pacific Northwest (US) title and Queensland Amateur – both match play championship titles.

Higginbottom is playing well, along with Papadatos, Kato and Zunic.

A notable exclusion from the team is Matt Stieger – who continues to sit out of representative golf following the events of Riversdale where golfing administrators issued the 2011 Australian Amateur champion with a suspension after a breach of the Player’s Code of Conduct.

In the women’s series Western Australia appears the team to beat with Whitney Hillier and Min Jee Lee spearheading the defending champions.

Victoria is another team to follow with Breanna Elliott and Su Hyun Oh both experienced in the match play format. New South Wales is headed by Cathleen Santoso and Adriana Brent, with Ashley Ona and Ellen Davies-Graham leading the Queensland charge.