The long wait is over with Rory McIlroy sensationally celebrating St. Patrick’s Day and silencing his critics with victory at the Players Championship.

McIlroy emerged a deserved winner posting an emotional rollercoaster 14 holes before birdieing both the 15th and 16th on his way to claiming a one-shot success with his 16-under par triumph.

McIlroy denied last year’s losing US Ryder Cup captain, Jim Furyk, who stormed home under overcast skies to post an eight-under par 64 for a 15-under tally. To his enormous credit Furyk waited near the scorer’s hut to congratulate McIlroy.

“This is a very special win and I just tried to treat it like another day even though I’ve had a lot of close calls this year”, said a beaming McIlroy.

“They didn’t mean anything to me and, if anything, they were good for me.”

“I called them ‘remote misses’ as they gave me more hope to continue to go forward and go close again, so all those experiences this year have led me to this point.” 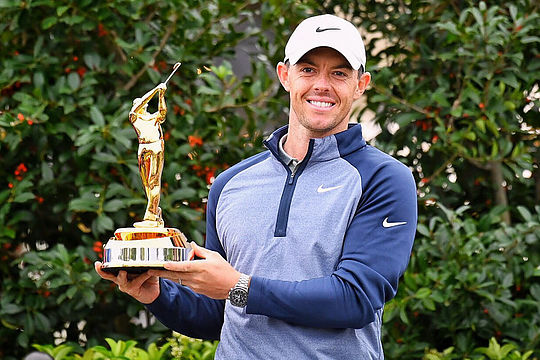 “Ultimately, they were good for me as they got me over the line today.”

“The final few holes were tough but to get the birdie on 15 after having to take the bogey on 14 was massive.”

“I knew 16 was a good chance and then to par the last two holes, and hit three good shots when I needed to gives me a lot of confidence going forward.”

“I’ve had a great start to the season and this is a massive win but the way I played those last few holes gives me so much confidence, as I said, going forward.”

The new World No. 4 ranked McIlroy had sent shockwaves into his fans doubling the fourth before regrouping to play his remaining 14-holes in three-under.

As McIlroy made his way to the 72nd green he took off his Nike cap and then waved his putter triumphantly before holing out for par and heading to the scorer’s hut to chants of ‘Rory, Rory, Rory’.

The win is McIlroy’s 15th PGA Tour triumph, his 24th worldwide and comes with the Masters just a month away.

McIlroy, who had also been 0-9 since the start of 2018 season when starting out in the final group, has finally put that stat to bed.

There was no emerald green in McIlroy’s last day attire but he made his Sawgrass rivals green with envy in capturing the $2.25m first prize cheque and the richest in golf.

McIlroy went into the final day sharing second place on 14-under par and knowing that seven of his 14 PGA Tour victories have come when he had not been leading ahead of day four.

However, McIlroy’s best finish in nine prior Players appearances was a share of 6th place in 2014 while his only other top-10 was a year later in sharing eighth place.

Though there was one very positive pre-round stat to boost his hopes of victory and that was he led the field in players the par-3s to be five-under on the ‘3’s for the three rounds.

The Ulsterman’s fifth birdie of the day dropped just moments before Furyk birdied the last in a round of 67 to snatch the clubhouse lead at 15-under par.

The roar around the par-5 16th said it all with McIlroy incredibly sending his 173-yard second shot to 19-feet and while just missing an eagle ‘3’ he comfortably holed out for birdie and go to 16-under.

One in front, two holes to play and a long-overdue 15th Tour at the fingertips.

McIlroy didn’t disappoint grabbing a pair of pars for his biggest career win since September 2016 in capturing the Tour Championship.

Tiger Woods made up some ground with a 3-under 69 but it was a case of too little, too late. The 43-year-old closed the tournament in a share of 30th on 6-under with the quadruple bogey 7 at the infamous 17th hole in round two proving quite costly in the end.

The good news, with the Masters just around the corner, was Woods’ form on the greens has shown signs of improvement thanks to his new putting coach.

Jason Day, who was playing alongside McIlory, could not get his game going on Sunday and finished with an even-par 72 to slip back into share of 8th place at 12-under.

Adam Scott was another shot back in a tie for 12th while Cameron Smith was the only other Aussie to make the weekend in a share of 56th.

Marc Leishman and Aaron Baddeley failed to make the cut.