Is it Australia’s turn at the World Amateur?

The men’s section of the 28th World Amateur Team championships kicks off shortly with a record 72 teams competing across the PGA Sultan Course and Cornelia Course in Antalya, Turkey.

The Sultan Course is also the venue for next week’s Turkish Airlines World Golf Final, a $5.2 million bonanza for just eight players. 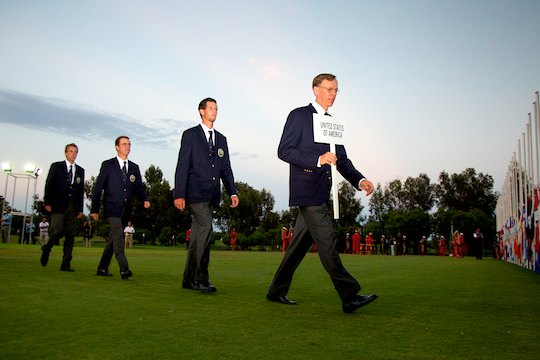 Team USA marches in the opening ceremony at the 2012 Eisenhower Trophy in Turkey (Credit: USGA/Steve Gibbons)

It is these riches that the 223 contestants at this World Amateur Championship aspire to and it is somewhat befitting they get to play the same course set to stage one of the the world’s richest tournaments.

Yet this week they are playing purely for pride, and the honour of holding aloft the Eisenhower Trophy that goes to the winning male team.

The Australian team of Daniel Nisbet, Cameron Smith and Matt Stieger have been preparing all week in Turkey in attempt to become the fourth Australian team to collect the Eisenhower Trophy, after victories in 1958 at St Andrews, 1966 in Mexico and in 1996 in the Philippines.

On paper the Aussies should contend well in Turkey.

Nisbet won this season in America and played well at the British Amateur, Stieger is a tenacious competitor when the glove is on and will fight all the way, and Smith is one of our most consistent players, which will enable Nisbet and Stieger to be aggressive.

This is a well selected team based upon our top-3 players leading into the event. Unlike other years where Golf Australia’s selection process has raised more than a few eye-brows, this team is the best we can produce at the time.

France is the defending champion and is vying to become the first team to win back-to-back titles since the USA won in 2000, 2002 and 2004.

Brun is obviously in good form, and he and teammates Paul Barjon and Edouard Espana are expected to mount a strong defence of their title.

The format has each team with two or three players, who each play 18 holes of stroke play over four days.

In each round, the total of the two lowest scores from each team constitutes the team score for the round. The four-day (72-hole) total is the team’s score for the championship.

Eight of the world’s top-20 players according to the R&A World Amateur ranking system are competing this week in Turkey.

World number two, Daan Huizing, represents The Netherlands. The Dutchman has had a season to remember, blowing away fields in the Lytham Trophy and St. Andrews Links Trophy – two of the biggest amateur events in the UK.

USA starts as firm favourites with all three team members, Chris Williams (No.1), Justin Thomas (No.3) and Steven Fox (No. 19) insider the world’s top-20.

Williams won the Western Amateur in August with Thomas making the quarter-finals in Chicago to then move to the US Amateur, where a semi-final appearance cemented his position in the US team.

Fox, the reigning US Amateur champion, will form a formidable partnership with Williams and Thomas for the Americans.

USA have won the title thirteen times, the last occasion in 2004 in Puerto Rico and were runners-up to Scotland in 2008 in Adelaide.

Germany is another team that will feature strongly.

The Germans are lead by Marcel Schneider, the 2012 Australian Amateur champion and world number sixteen. Schneider was runner-up at the Turkish Amateur firing a closing round 64 on the PGA Sultan Course, as well as at the Spanish Amateur and the Portuguese Amateur.

Moritz Lampert, 20, won both the Portuguese and German Amateurs this summer and will support Schneider well.

The pre-tournament buzz was that former Chelsea and AC Milan player, Andriy Shevchenko who was going to play for Ukraine – the former Soviet state’s first appearance in the World Amateur – before family commitments prevented his appearance.