Is this our best chance ever at the Masters?

At the Masters, the course itself is the drawcard, just as popular as any player. Come April each year fans are excited to see the famous holes and landmarks in all their splendour at the only major played on the same course each year.

With top-ranked Tiger Woods missing this week following back surgery, defending Masters champion Adam Scott, currently No. 2, can move to No. 1 with a tie for third with no more than one other player. 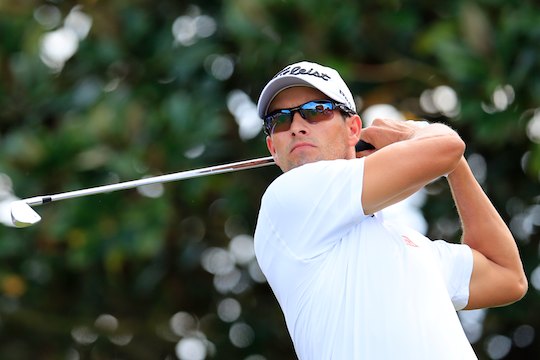 Last year, Adam Scott delivered Australia its first green jacket winner, emotion pouring from the depths of his soul as he out-duelled Angel Cabrera in a playoff in the rain.

Two years ago, Bubba Watson hit that famous slingshot around trees on the 10th hole in a playoff, the defining shot that gave the American with the homemade swing his first green jacket pipping Louis Oosthuizen.

In 2011, Rory McIlroy collapsed on Sunday while South Africa’s Charl Schwartzel birdied the last four holes to win what is considered one of the most exciting back nine Sundays ever.

The Masters is an event that delivers pure drama year after year, and there’s no reason to feel this year will be any different.

With seven different winners in the last seven years, the 2014 Masters is as wide open as ever, yet we all favour Scott to make a good showing. Since October, the world number two has been in the top-10 at five of the seven tournaments he has played.

Last month he could have gone to world number one but surrendered a commanding lead to finish third at the Arnold Palmer Invitational and hasn’t played competitively since.

No one has defended a green jacket since Tiger in 2002, but Scott has broken through as a major winner and knows what it takes to seal the deal at Augusta.

Scott is not the only player hunting the top spot, Swede Henrik Stenson can also take the No. 1 ranking if he finishes tied second with no more than one player.

The only Australian to hold the number one mantle since the inception of the rankings in 1986 is Greg Norman who held the record of 331 weeks until it was broken by Tiger Woods.

But let’s not forget Jason Day and his love affair with Augusta not to mention his capacity to win the green jacket.

Day recently won the Accenture Match Play event but comes to Augusta under an injury concern with his thumb.

Day has played the Masters three times and has a 2nd and 3rd place finish to his credit.

There would be nothing better than to see Scott helping his fellow Aussie slip on the green jacket and Day certainly has the game and capacity to win at Augusta.

John Senden, Steven Bowditch and Matt Jones all gained ‘you win and you’re in’ starts following a stellar month of Aussie victories on the PGA Tour, whilst Oliver Goss tees up after his runner-up finish at last year’s US Amateur.

After three victories in the last four PGA Tour events for Australian golfers and four in the last seven, it’s just great to see Aussies collecting the trophies.

With any luck come this Sunday we can again have an ‘Aussie’ duel over the back nine at Augusta just like last year and another green jacket placed on Aussie shoulders in the Butler Cabin.