It was always going to be a grind. Following major storm delays the tournament was forced to play 36-holes on Sunday and as the lead ebbed and flowed it was Japanese superstar Ryo Ishikawa, who came out on top following a playoff with Jung-Gon Hwang.

Ishikawa stood on the first tee on Sunday with a share of the lead alongside Koichi Kitamura and Korea’s Jung-Gon Hwang at 10-under, however by the end of 18 holes the 27-year-old had slipped back into 6th place and looked well out of contention. 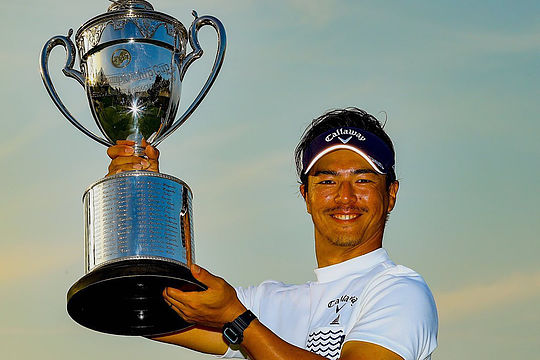 The final 18 holes provided more surprises with third round leader Ryuko Tokimatsu buckling under the pressure with a 73, which left Ishikawa and Hwang to battle it out for the title.

Both players grabbed two early birdies but it was the 12th hole that would see the match swing in Ishikawa’s favour. More drama unfolded at the 17th when Hwang’s approach shot rolled into the water off the green and he walked away with a double-bogey to leave the duo in a tie heading to the 18th hole.

Ishikawa and Hwang each had a look at an eagle but settled for birdies and headed to a playoff.

An eagle was again on the cards at the first playoff hole following two superb approaches but it was only Ishikawa who could find the bottom of the cup and the title was his for a 15th Japan Tour victory and his second “major” title.

“I still can’t believe this. It feels like a dream. I think many of the fans believed in me more than I did myself,” said an emotional Ishikawa.

“I was able to win thanks to all of the fans. It took so long to get here. Many followed me through all 36, 37 holes today, and I bet many felt that I was out of contention during my first 18 holes.”

“I still can’t believe I am standing here as a winner. It feels like a dream. To win a tournament again felt so far and almost impossible to me at times, but now I am back and by winning against the players like Rikuya Hoshino. who won last week gives me confidence.”

45-year-old David Brandson finished as the best of the Aussies in a share of 7th place with last week’s Korean PGA Championship winner Won Joon Lee closing in 38th place and Adam Bland at 58th.

The Japan Tour will take a six-week break before the SEGASAMMY Cup returns in Hokkaido in late August.