Can Adam Scott break his major drought and in the process become the first Australian to wear the famous green jacket?

As far as recent major performances Scott has recorded six top-15 finishes in the last eight majors, including leading The Open Championship last year for most of the week before Ernie Els’ last day charge to deny his good mate the victory. 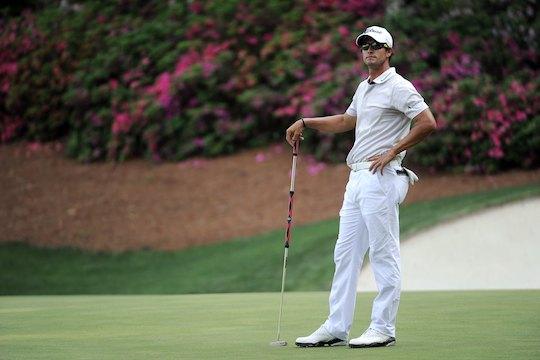 Eleven is the number of times Scott has played the Masters. To put that number in perspective – it took Phil Mickelson twelve attempts before claiming his first title at Augusta, in Scott’s case he will be hoping that twelve is also his lucky number.

Last month Scott and Els slotted in a practice round at Augusta with Scott signalling he is ready to win after what he described as a near perfect preparation leading into the year’s first major.

With just three other Australians in the field – Jason Day, John Senden and Marc Leishman – our hopes rest with them as they attempt to win the one major that has eluded our players to date.

Scott and Day know what it is like being in contention come Sunday at Augusta.

In 2011 they both tied second and last year Scott finishing strongly to be tied eighth.

Day comes into Masters week with an impressive result at the World Golf Championship last month where he beat Englishman Ian Poulter in the consolation final 1-up to take third place, moving him to 35th in the new global rankings.

Day rises to the occasion in bigger events and if ever there was a ‘big’ golfing event it is the week of the Masters.

Certainly Tiger Woods is seen as being a difficult man to beat in a major.

With 14 events played on the US Tour this season, Woods is the only multiple winner with three victories.

Thanks to some advice on the practice green from good mate Steve Stricker last month, Woods is once again holing more than his fair share of clutch putts when the heat is on.

The newly crown world number one will be seeing to finish the major drought that stretches back to the US Open of 2008.

Chinese 14-year-old Guan Tianlang, who will become the youngest player in Masters history when he tees up on Thursday, enjoyed a practice round on Monday with Tom Watson.

It will be interesting to see how Tianlang deals with the length required off the tee at Augusta – he’s not known as a long hitter.

Scotland’s Martin Laird won the Texas Open on Sunday to claim the 94th and final spot in this year’s Masters field, securing his place for the third year in a row.

Much of the talk this week is about how Augusta is playing.

Not surprisingly, the par 5′s are seen as the opportunity holes – if such a hole exists – and the general consensus is that the hardest stretch comprises of holes 10 through to 12.

The second shot at the 11th, all of the 12th, and the tee shot at the 13th hole at Augusta are nicknamed “Amen Corner”.

Come Sunday this is where all the action usually takes place and it’s often remarked the Masters never really begins until the leaders make the turn on Sunday.