It’s On Again: Spieth vs McIlroy at Northern Trust

McIlroy, who dropped back to World No. 3 this week, won the opening skirmish at last month’s Abu Dhabi HSBC Championship by three shots in finishing third with Spieth fifth in the UAE capital. 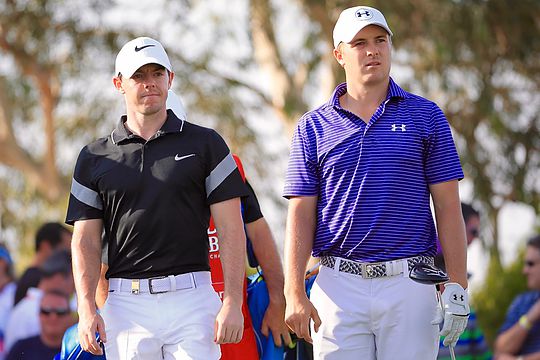 Now McIlroy will be looking to win their second ‘same tournament’ encounter, and also in his first appearance in the event at the famed Riviera course.

“If can get off to a good start to the year, there’s no reason why I can’t be the number one player in the world going into Augusta,” quipped the 26-year-old.

“That’s a goal of mine, to get off to a fast start…and try to reclaim that position as quickly as I can.”

And pivotal to McIlroy’s Augusta aspirations is this week’s maiden PGA Tour appearance of 2016 and the first of five events he will contest in the up-coming seven weeks.

“I’ve heard Riviera is a great course, and I want to go play there in LA, and I think it’ll be a good course for me,” said McIlroy.

“I’m very excited that the Northern Trust Open is in my schedule for the first time. I’ve heard so many positive things about the tournament and the exceptional quality of the course.”

“Many legends of the game have played and won at this iconic venue throughout its long history, so I’m really looking forward to visiting LA and experiencing Riviera for myself.”

Spieth will tee up in L.A. with fond memories of the course despite the disappointment of finishing well down the leaderboard in 21st place down Highway 1 at Pebble Beach.

“This tournament means a lot to me,” said the 22-year old Texan.

“I think this is one of the greatest golf courses in the world. This event is one that I owe a lot back to.”

“It was a great experience getting the PGA Tour start that then helped our team win the NCAA championship that year. We got some good insight on pin locations and how it would play. It’s dear to my heart.”