The Tiger Woods vs Phil Mickelson rematch has been officially confirmed for May 24th and the charity showdown as previously disclosed will include NFL quarter-back legends Tom Brady and Peyton Manning.

The foursome will tee-up for “The Match: Champions for Charity” to be played at Medalist Golf Club in Hobe Sound, Florida with Woods alongside Manning while Mickelson will team up with Brady.

The match will be held a week after the foursome of Rory McIroy and Dustin Johnson tackle Rickie Fowler and Matt Wolff in a similar Coronavirus fund-raiser at the Seminole Club some 17 miles to the south of the Medalist Club.

The Medalist match will include nine holes of four-ball and nine holes of modified alternate shot in a format “aimed to provide an entertaining mix of strategy, team collaboration and consequence to nearly every shot,” Turner Sports said.

No fans will be in attendance, but Turner Sports said all of the players would wear microphones throughout, enabling them to connect with each other and broadcast commentators. 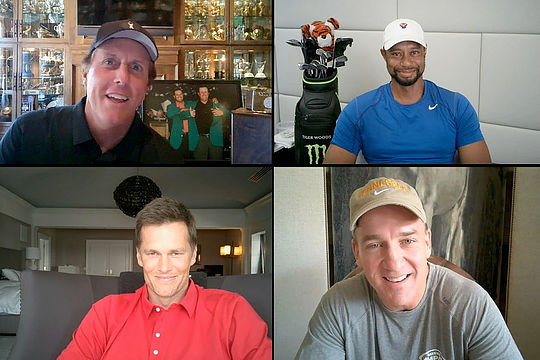 “We’ve been playing down here [in Florida] but not for trophies and we miss competing. Hopefully we can all come back safe. It will be a new norm for sure and what that’s going to look like is going to be very interesting,” said Tiger about getting the chance to get out and be competitive again.

“Without the fans, it’s going to be very different…but at least we’ll have live sports again.”

As part of the competitive play, there will also be a set of on-course challenges for charitable funds in addition to the $10m the players have pledged.

Beneficiaries include directrelief.org, which equips health workers with supplies, the American Red Cross, the grant-making initiative Save Small Business and the food distribution charity All In Challenge.

The event, which has been in the works for weeks, follows the made-for-TV clash of Woods and Mickelson in Las Vegas in late 2018, which Mickelson won on the fourth playoff hole.

This year’s event comes with sports fans around the world hungry for live action to watch amid the coronavirus pandemic. The US PGA Tour isn’t set to resume play until the Charles Schwab Challenge at Colonial in Texas on June 11.