The 41-year-old tour journeyman fended off the spirited challenge from fellow countryman Tomoharu Otsuki, who fired a 65 to win his fourth Japan Tour title, his first in seven years. 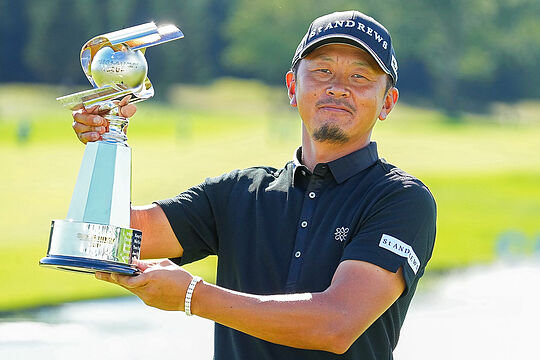 “It’s been seven years since I last won here. The first win one was a come-from-behind victory, so I’m happy that I started in the lead this time and won,” said Iwata.

“It was really disappointing to finish second in the Diamond Cup this year, and then I also missed out on The Open qualification as well as missing the US Open qualifiers cut through the playoff. I’m thinking of getting better every single day, it feels great to be back as the champion.”

Brad Kennedy, who won this event in 2018 finished the best of the Australians and the internationals in a share of 14th position and was the only Aussie to make the weekend.

Kennedy, 48, was pleased overall with his efforts with being the top international played for the week.

“I hit a lot of fairways, from the tee it’s really good,” said the three-time Japan Tour winner.

“Just really need to work on my yardages and give myself chances from inside ten feet, which I didn’t do this week,” said the 48-year-old. Finishing 14th, but a lot of positives on this golf course that I love.”

Kennedy was seeking to gain another Japan Tour title to his credit, his last victory came in 2018 at this event. Kennedy has also won once on the Asian Tour winning the 2020 New Zealand Open and is a six time winner on the Australasian Tour, winning recently the 2021 TPS Victoria title.