The Jack Newton Junior Golf Team representing NSW has won the 2015 State of Origin defeating the Junior Golf Foundation of Queensland by 18½ matches to 11½ matches at Newcastle Golf Club.

The win was NSW’s seventh consecutive victory in this inter-state junior golf event based on a format very similar to the Ryder Cup, between New South Wales (Jack Newton Junior Golf) and Queensland (Junior Golf Foundation of Queensland). 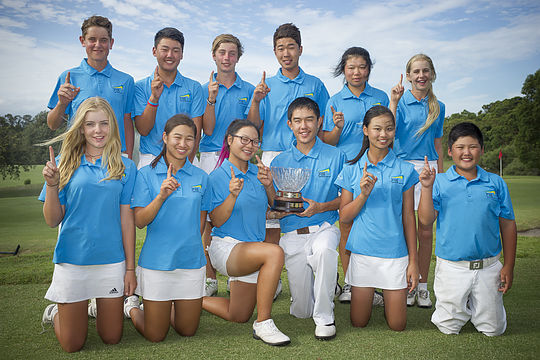 Six boys and six girls are selected from each state, one from each age division from 12 years and under right through to 17 years based on the player in each age division who achieves the lowest average scoring in nominated events the previous season.

Following the opening day’s play on Monday, NSW had taken a commanding 7½ to 4½ lead due to the solid 5-1 win in the afternoon fourball matches, after Queensland had narrowly won the morning mixed foursomes encounters 3½ to 2½.

The Tuesday third round foursomes matches again saw NSW dominate winning 4-2 to set up a 11½-6½ match score which required NSW to only win four of the twelve singles matches in the afternoon.

NSW flew out of the box in the singles encounters with Belinda Ji defeating Caitlyn Campbell-Nyman 6&4 in the 12-years girls, but Queensland quickly responded winning the 12-years boys as Quinnton Croker accounted for Jeff Fan, 1up.

In the 13 years division Queensland’s Joy Mannix accounted for Amber Thornton 2up, yet Aidan Powter returned NSW back to the winner’s circle with a solid 3&2 win over Bailey Arnott to give NSW three of the four matches needed for victory with eight matches remaining.

In the 15 years division, NSW’s Chloe Thornton accounted for Rhianna Lewis 3&1 and Jordie Garner from NSW defeated Chris Jiminez, 4&3. Celina Yuan from NSW got her match up against Karis Davidson in the 16-years girls with a 1up victory before Queensland responded with a string of match wins.

Charlie Pilon claimed a solid 5&3 victory over Jason Hong in the 16 years boys which set the stage for a two further match wins for Queensland in the 17 year division with Kate Law defeating Doey Choi – 1up and Doug Klein proving too strong for Kevin Yuan winning his match, 2&1 resulting in a 7-5 singles match result in favour of NSW.