For the last three years running Jake Higginbottom has won a major amateur title each season.

The 17-year-old’s 2&1 victory over Tim Hart at the Queensland Amateur championship yesterday was yet another in an increasing number of titles that has landed in the Novcastrian’s hands. 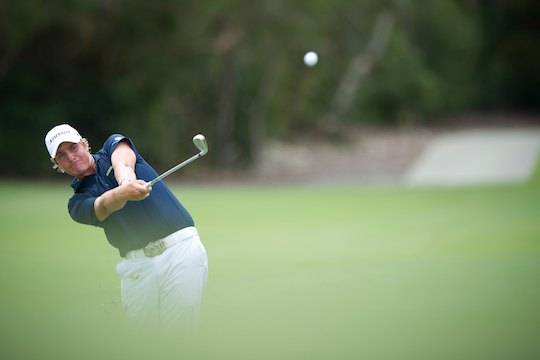 Higginbotton is a holder of both the New South Wales and Queensland Amateur crowns as well as an international title, the 2010 China Amateur Open.

This impressive list doesn’t even include the considerable success he’s achieved as a junior.

Higginbottom has another year left within the junior amateur ranks. His 6 foot plus stature and raw power driving game, coupled with an expanding short game repertoire, gives a strong indication of a bright future in the game.

It was only last year when Higginbottom powered to his biggest amateur career title at the time by defeating Walker Cupper, Tommy Fleetwood, 3&2, to win the New South Wales Amateur title at Royal Sydney.

No one expected the young 16-year-old Higginbottom to defeat the more seasoned and experienced Fleetwood and the victory was Higginbottom’s baptism into top flight amateur golf.

On paper Fleetwood easily accounted for Higginbottom in the winning and experience stakes, yet in that final Higginbottom left the statistics in the clubhouse and instead let his clubs do the talking.

“I took a lot away from that victory in Sydney,” says Higginbottom this week in Brisbane.

“It was like my first real big win against a big name player. China was also huge, but you always remember your first big win.”

“It’s also great to get another win this season with the Queensland Amateur, as it’s my goal to win at least one event every season.”

Higginbottom is not adverse to the hard work needed to progress to the next stage on the international amateur circuit and recently made a decision to swap coaches coupled with lifestyle decisions to take a new approach to the game.

“I’ve done an awful lot with Gary Barter at The Australian Golf Club in preparation for these events and with moving forward,” says Higginbottom.

“After Keperra this week I’m flying to compete in the Handa Junior Masters in Perth, then will go to play in the Thunderbird International in Arizona. The win in Queensland shows that we’re on the right track with what Gary and I have worked on.”

As a 15-year-old Higginbottom qualified for the NSW Open and in 2006 he won his age group in all 25 Jack Newton Junior tournaments he played.

Higginbottom began playing at the Charleston Golf Club near his home with father Bruce as a 9-year-old. He started with a handicap of 27 and had it down to 4 by the age of 12 and currently plays off plus three.

“This is probably my third year out with playing golf seriously,” says Higginbottom, who’s currently ranked 55th in the world.

“I want to make more Australian teams moving forward. I played in the Trans-Tasman as well as the Ashes Series back in March and enjoyed every bit of it. My goals as to try and get into more national teams in the future as well as get my world ranking higher.”

The signs of a promising amateur career where there early for Higginbottom.

At just 13-years-old he shot an impressive 8-under-par, 64 around Waratah Golf Club to claim the Lake Macquarie Junior Classic.

Higginbottom’s resume with junior amateur golf is littered with wins and top-3 finishes, too many to identify, yet each represents a critical part of his development.

“My game is moving in the right direction,” he says.

“I’m more consistent on the course than when I was fifteen or sixteen. I drive the ball stronger and my short game is better under pressure.”

Higginbottom is ready to become the next generation of successful Australian golfers and isn’t shy to admit it.

“I’ve made the decision to focus on golf and to be the best that I can,” says Higginbottom who’s elected last year to leave school after completing his year 10 School Certificate level.

“Golf is my life and I love winning. Yesterday’s win is a real confidence booster especially given the changes I’ve made, both on and off the course.”

With a new coach and newfound optimism for the future, Higginbottom is on a roll and he’s momentum is building with every tournament he wins.

He again showed yesterday at Arundel Hills over the more experienced Tim Hart, that despite his boyish charm and looks, when the glove is on Higginbottom is armed and very dangerous.