Jake McLeod has added another victory to his credit winning the Queensland Amateur Championship on the 38th hole against Luke Humphries at Pacific Harbour Golf and Country Club.

McLeod, ranked the 6th seed entering the match-play, eliminated a number of marque players in making the final. 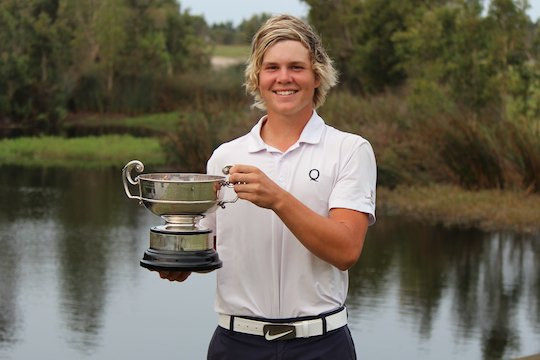 In Friday’s semi-final the 18-year-old defeated Daniel McGraw, 3&1, which was on the back of a solid 1-up victory over James Gibellini in the morning’s quarter-final.

“I played solid all week,” said McLeod, who won the 2012 Northern Territory Amateur and the Golf SA Amateur Junior Classic.

“My ball striking was solid and that enabled me to get some solid matches under my belt against strong players.”

“To get the across the line against Luke [Humphries] in a match, which could have gone either way, is very satisfying.”

Humphries, from Goulburn in NSW, also had a stellar tournament defeating Cameron Smith on the 19th in the quarter-final and Aaron Wilkin, 2&1, in the semi-final.

The result was Humphries’ best amateur appearance after reaching the semi-final at the 2011 NSW Amateur and securing top-16′s at the 2011 Australian Amateur and Queensland Amateur.