A scintillating 10-par round of 62 on Saturday paved the way for Korea’s Ha Na Jang to take out her third title of the LPGA season with victory in the Fubon LPGA Taiwan Championship on Sunday.

The birdies may have dried up on Sunday even if the weather did not, but Jang’s final round 71 was enough to hold off the fast finishing Shanshan Feng (66) by a single stroke, with Korea‘s Hyo Joo Kim and Canada’s Brooke Henderson tied for third at a distant 10-under par. 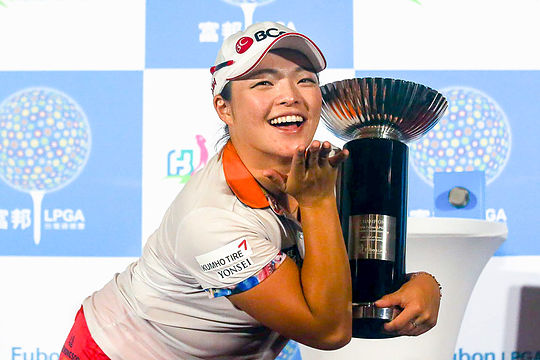 Jang’s 17-under par total was earned the hard way as she ground out 9 straight pars to only barely hold off the in-form Feng.

“I was, like, nervous every hole,” Jang said. “Shanshan really good play today. That’s why I got very nervous. And then I’m just simple every hole because weather is just so bad. And then just keep going the fairway and the green. That’s why great score, too. Really happy today. Thank you.”

Jang joins Ariya Jutanugarn and Lydia Ko as having won at least three times on the LPGA this season and sees her break through the $1 million earnings mark for the year.

In a continuation of their consistent years to date, Australians Minjee Lee and Sarah Jane Smith finished the tournament in a share of 12th place at 4-under, while Su Oh was just a stroke behind them in a tie for 20th place.

Incheon, South Korea will host the next event of the season at the LPGA KEB Hana Bank Championship this week.