Lee Janzen has defeated Miguel Angel Jiménez to take out the SAS Championship on the PGA Champions Tour in North Carolina.

Janzen, a former two-time US Open Champion and eight time PGA Tour winner, made a 12 metre birdie putt on the first play-off hole to secure the victory. It was Janzen’s second PGA Tour Champions title from a period of 156 senior tournaments after winning the ACE Group Classic back in 2015. 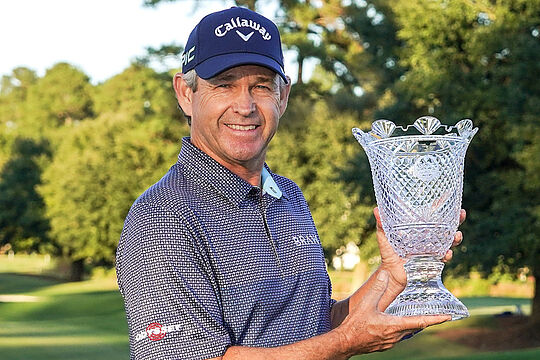 Starting the final round two shots back of co-leaders Jiménez and Alex Cejka, Janzen opened with a bogey rattling off six birdies including the one on the last to get into the playoff.

“I’m trying to keep it together,” said Janzen after closing with five-under 67 for a 12-under-par total.

“I haven’t had a top-10 in I don’t know how long. If you looked at my performance, you’d say ‘I’m not going to pick him this week.”

“If I compare this to all the other times I’ve won, this is the most sporadic. I survived some bad shots.”

Janzen moved to 37th in the Schwab Cup standings, with the playoffs beginning next week at the TimberTech Championship. Janzen’s finish all but ensured he’ll reach the second event of the playoffs.

For Jiménez he will be rueing back-to-back runner-up finishes following his second place finish last week behind Phil Mickelson.

Stuart Appleby finished the best of the Australians in a share of 12th position at 8-under with John Senden in a tie for 34th followed by Rod Pampling.

Up next is the Charles Schwab Cup Playoffs, a three-tournament post-season run that starts at the Dominion Energy Charity Classic at the Country Club of Virginia in Richmond, Virginia, next weekend.

The top-72 players on the money list advance to the playoffs and in the top spot will be 64-year-old Bernhard Langer. Aussie Rod Pampling (12th) made the playoffs with a season earnings of US$1,691,087, with John Senden (84th) narrowly missing the season ender.