Mizuki Hashimoto, Miku Ueta and Ayaka Tezuka combined for a 5-under 139 total to finish the Queen Sirikit Cup on 20-under and seven shots ahead of nearest rivals, New Zealand.

The win comes 20 years after the last Japanese team tasted victory in 2002 with none of the current team even born at that time. 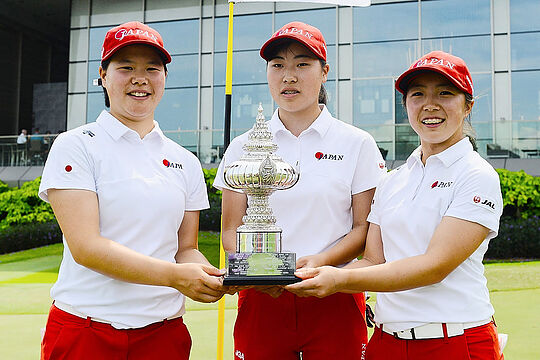 “This win is very special as we have managed to win the Queen Sirikit Cup again after 20 years. It’s a surreal feeling. I’m so happy,” said Hashimoto.

“There were lots of expectations on me after I won the Women’s Amateur Asia-Pacific Championship [last November], and I’m pleased I was able to handle that pressure well and do well in Singapore.”

“As a team we tried a new emphasis this week on recovery. We usually practice in the afternoon after we finish our round. But because of the heat here we had a new plan – swim, relax and going to the gym to help our bodies recover.”

Eyeing off a seventh consecutive win, the Koreans (Lee Ji-hyun, Kim Min-byeol and Bang Shin-sil) were unable to chase down Team Japan and had to settle for third place behind the Kiwis on 10-under and ten shots adrift of the leaders.

Singapore were fourth, followed by Chinese Taipei, Thailand and Australia in a share of 7th place alongside Malaysia.

A final round 5-under 67 from Western Australia’s Kirsten Rudgeley, who finished in 6th place individually, helped rescue the week for the Aussie team, which also included South Australia’s Caitlin Peirce (19th) and Kelsey Bennett (T20).

“It’s been good. We’ve enjoyed the whole week, apart from the weather,” laughed Rudgeley referring to the oppressive Singapore heat.

“I’ve loved working as a team. It’s been good fun and I’ve learned that you need to drink a lot of water over here.”