Growing up a wedge shot from the third green, Basic took advantage of his good fortune of living on a golf course. At seven he was striding the tight, treelined layout, hitting a makeshift 7 iron and dreaming one day that he’d be playing professional golf. 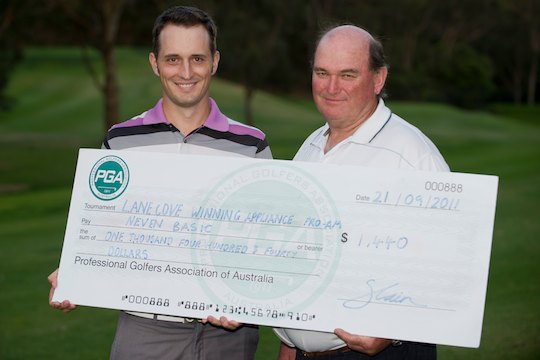 At twelve, Basic became a member of Lane Cove Country Club playing the Wednesday and Saturday competitions and winning against players twice his age. He worked in the Pro-Shop for a period of time whilst attending St Aloysius College in North Sydney before going on to compete a Commerce degree at the University of NSW. Basic first broke the par-64 Lane Cove layout at 16 with a 64 and has holed the 195 metre 1st with a 1 iron.

Those who have played Lane Cove appreciate its layout, which is an interesting mixture of par 3’s and 4’s that requires precision from the tee. It’s a fun but challenging course, not overly long, but with the bush lined fairways that hug the course any errant shot will quickly rack up a player’s score.

Located less than ten kilometres from the CBD of Sydney and boasting arguably one of Sydney’s best Thai restaurants, Kit’s, is another attraction for those time starved golfers looking for that executive nine.

A look at the honour rolls that line the walls of the Clubhouse sees the Basic name scattered across the boards. It’s a history of Basic’s development from holes-in-one and Junior Captain through to Club Champion and Club Foursomes Champion.

The most prized roll is that of the Lane Cove Pro-Am, which after firing a five-under-par 59 will see Basic’s name etched in as the 2011 winner, his second Pro-Am at Lane Cove after being a co-winner in 2006.

Basic’s 5-under-par score was enough for a one stroke win over Lucas Bates and Andrew Evans, in what was a sentimental win for the Japan Tour rookie.

It was a victory in front of friends and local business people who had supported Basic over the years towards his quest of attaining playing privileges on a main tour since he’d turned professional in 2005, securing his Asian Tour card before progressing to the rich Japan Tour.

Basic was clearly moved with the nostalgic significance of winning the Lane Cove Pro-Am and the joy of being back at home in what was a respite from the vigour of being a touring professional.

“It was fantastic to win on the course you started playing on as a kid,” said Basic, who’s currently ranked 63rd on the Japan Tour money list with ¥9,145,733 (AUD$125,000) and has a tied 3rd at the Kansai Open as his career best after leading the tournament following the second round.

“My schedule saw a window to play back at home and I jumped at the opportunity. To break 60 on any layout is a confidence booster and it was great to win in front of guys you’ve known for more than twenty years.”

Basic didn’t have long to enjoy the festivities with his return flight to Japan scheduled the Sunday after his victory, yet he made sure to catch up with his loyal band of supporters at the Club. The loyal fan base follow “their Pro’s” every move and not a week goes by in the bar without some mention as to how Basic is playing in Japan.

If there’s an underlying feature of the local pro-am circuit, it’s the way local business, players and residents combine forces to promote an event which is delivered with pride and passion. Each pro-am stamps its own stye to create a unique rich fabric, a credit to all those involved and to the PGA of Australia for supporting the numerous pro-am tournaments scattered around the country.

The Lane Cove Pro-am is not different with those extra measures taken to ensure everyone from the touring professional, struggling club pro, to the weekend hacker experiences the thrill of playing “tournament golf”.

It was a case of homemade cakes that only your dear old grandma can bake, cold clean beer on tap, fantastic food and the great company of playing partners. Life would not seem to get much better.

“This was the best I’ve seen the course presented in years and I had a ball,” said Basic, who was not the only professional to give credit to the event.

“The greens were true and a great speed, the sponsor’s banners gave it that extra touch. Everyone had a great day and enjoyed a few drinks afterwards on the balcony. You could not ask for better. It is different to being on Tour, yet playing Pro-Am’s are a lot of fun.”

Less than five days after his win Basic was making his way back to Japan to rejoin the Tour along with fellow Aussies Kurt Barnes, Brendan Jones, Paul Sheehan, Chris Campbell and Steve Conran.

Basic’s next event is the Tokai Classic where he knows he’ll have to bank another top-10 cheque to retain full playing privileges in Japan for 2012. Basic returns with a sense of vigour and confidence from the experience of being at home, irrespective of the status of the pro-am tournament when compared to world tours.

“It’s being my first year in Japan and you learn a lot,” says Basic.

“I’ve had three top-25’s as well as two top-10’s this season and feel my game is there. Hopefully this win at home will rub off and I’ll take plenty of positives from it back to Japan.”

“I love playing golf for a living and when you look back out on the course where you’ve learned the game and spent hours practicing, you wish for no other lifestyle.”

“It certainly puts everything into perspective, that’s for sure.”