Japan’s Ayaka Furue fired a course-record final round of 62 to finish at 10-under-par to claim her first LPGA title at the Women’s Scottish Open on Sunday.

Furue, who has seven wins on the Japanese Tour, finished at 21-under-par for the tournament, after starting the day four shots back from overnight leaders Celine Boutier and Lydia Ko. 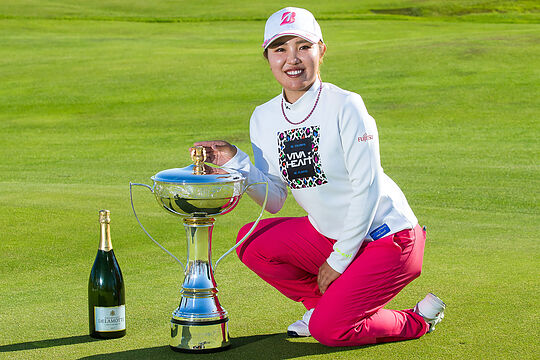 Furue ran off six straight birdies in the middle of her round to claim the US$300,000 first prize along with valuable momentum going into the final major of the year this week at the Women’s British Open at Muirfield.

Sunday’s result is a fantastic effort by Furue, a rookie on the LPGA Tour.

“I didn’t think I would win as a rookie,” said Furue, 22. “I’m very happy and I’m very grateful and very happy that I was able to win at a links course. My best part was I was very straight this week. And I made a lot of putts, short ones, and was able to make a few long ones, also.”

The Women’s Scottish Open marks the first of back-to-back weeks in Scotland for the LPGA Tour with the Women’s British Open next on the schedule.

Minjee Lee finished the best of the Australians in a share of 18th position, with Hannah Green in 34th position. Su Oh and Whitney Hillier missed the weekend.

The AIG Women’s Open, the final major in the 2022, starts at Muirfield Golf Club in Scotland from 4-7 August where five Aussies will tee it up including Hannah Green, Whitney Hiller, Steph Kyriacou, Minjee Lee and Su Oh.