Japan’s Kazuki Higa fired a flawless final round six-under 65 on Sunday for a two stroke win the Shinhan Donghae Open.

Higa finished at 20-under-par with Thailand’s Tirawat Kaewsiribandit in a three way tie for second along with Cho Min-gyu of South Korea and Canada’s Yonggu Shin.

Tirawat, who started the day with a three-shot advantage and held a narrow lead for much of the day, closed with a 72 – which featured an incredible albatross – while Cho fired a 66, and Shin a 68.

The tournament was being held in Japan for the first time in its long history, having been previously played in South Korea every year since 1981. The event is tri-sanctioned by the Asian, Korean and Japan Tours. 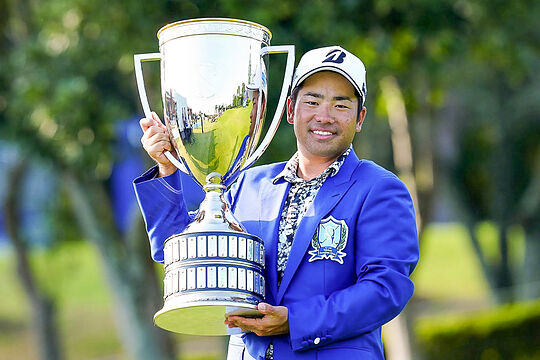 It was Higa’s third win of the season after two victories on the Japan Tour.

“There were a lot of pars along the way, especially on the back nine,” said Higa. I am happy to win a tri-sanctioned event and also win Tour cards for three tours. Top-ranked players from each Tour are here, and their game levels are really high. I am standing on the top of the money list [in Japan], and I felt like I was the representative of the Japan Tour, and I managed to win, which made me feel great.”

“I know I have opportunities to play on the Asian and Korea Tours now which is exciting for me. It will open more doors to other opportunities as well.”

The next event on the Asian Tour is the Yeangder TPC at Linkou International Golf and Country Club in Chinese Taipei, from September 22-25.