Japan’s Shugo Imahira has taken out the the Asia Pacific Open Golf Championship Diamond Cup at Oarai Golf Club on Sunday to secure his first Asian Tour title and sixth success on the Japan Golf Tour.

Imahira closed with a two-under-par 68 with his compatriots Kosuke Suzuki, an amateur, Hiroshi Iwata, Kaito Onishi, and Yuto Katsuragawa all in second place. 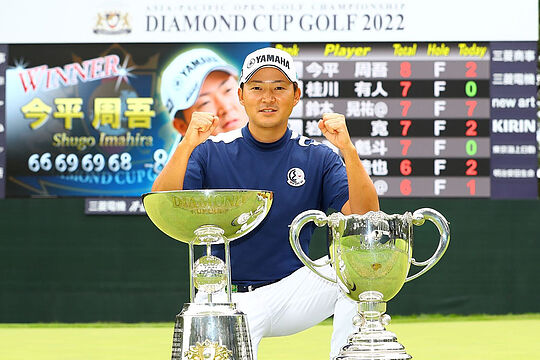 “I am really happy with this victory,” said Imahira, who received a winner’s cheque for US$178,205. “I haven’t really performed well this year, so I’m glad I am able to win early.”

“The Open was my goal at the start of this season. My 172 world ranking isn’t good enough to get me into overseas events, so getting into The Open by winning this week is amazing. The goal was to be a major player rather than a prize winner.”

In 2017, Imahira had his first win on the Japan Tour claiming the Kansai Open and finished 6th on the money list. He also won the 2018 Bridgestone Open in a season where he was second three times, third three times and had seven other top-10 finishes to be the leading money winner on the 2018 Japan Golf Tour.

Following opening rounds of 66 and 68, Todd Sinnott finished the best of the Australians in a share of 18th position at 1-under-par, a third round 77 damaging his chances of a top-10 result. Brad Kennedy finished in a share of 43rd position at 4-over to round out the Aussies who made the weekend.

Jake Higginbottom missed the cut with rounds of 83-71.