The 20-year-old, who was the highest-ranked Japanese player in the field at No. 22, shot a 5-under-par 65 on the final day to finish at 13-under-par to earn an invitation to the 2019 Masters Tournament and a place in the 148th Open at Royal Portrush. 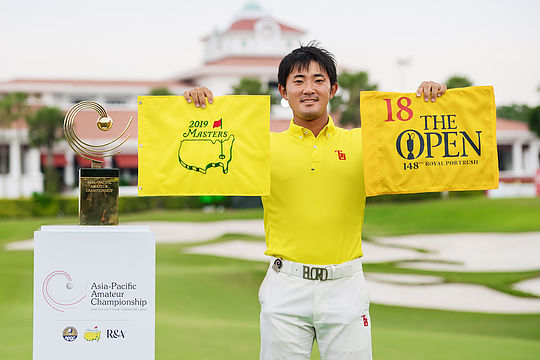 “This is simply like a dream. I have been dreaming of going to the Masters ever since I was a kid,” said Kanaya.

“I never expected to play the Masters and The Open so early in my career so this is just huge. I played well throughout the day but I think the key for me was how I kept my calm and composure during the round.”

Kanaya capped off a 64-65 weekend at Sentosa Golf Club for the win with the runners-up Thomas and Nakajima receiving the opportunity to play in The Open Qualifying Series.

Indonesia’s Lloyd Jefferson Go was fourth at 10-under after he managed one-under 69 in the final round, while KK Limbhasut of Thailand was next. Overnight leader Yuxin Lin shared the ninth position with three others after he faltered to five-over 75 in the final round.

Min Woo Lee was the best of the Australian continent finishing in a tie for 16th at 3-under, ten strokes behind the leader.

David Micheluzzi, who fired an opening round of 64 to be in the box seat for the tournament carded rounds of 71-69-77 to finish in a tie for 30th position. Shae Wools-Cobb was forced to withdraw from the tournament following the first round.