Aussies do love a battler and no-one has earned that ‘handle’ more in recent years than popular Victorian professional Jarrod Lyle.

The burly Lyle, who has twice beaten Leukemia and looks to have lost his US Tour card this year, has accepted an invitation to play in November’s NSW Open at Stonecutters Ridge in Sydney’s west, a tournament that holds special memories for him as it was his first as a professional. 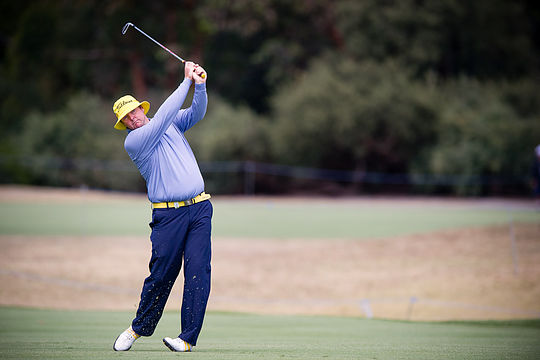 “I love playing at home and I’m excited about the upcoming Aussie summer of Golf,” Lyle said. “My first ever pro event was the NSW Open at Liverpool Golf Club in 2004. I think I finished fourth the year that Peter Lonard won it.”

Lyle decided to try his luck in the Australian events this summer after struggling to earn enough to retain his card in the US using his medical exemption.

But the talented professional still feels he can match it with the best of them.

“I am extremely proud of my two web.com tournament wins over there,” he said. “I loved my time in America, but being a bit older and wiser I’m starting to look at things differently.”

“I decided to take a step back and re-assess what’s important and watching my girls grow up is where it’s at. I still feel like I can win tournaments. I want to be a golfer.”

“The enjoyment is definitely still there and I want to go out every day and shoot the lowest score I possibly can.”

“Tournament golf has been a huge part of my life as both an amateur and a professional.”

And while Lyle is still to win a major tournament in Australia, he’s keen to set about changing that equation.

“I don’t think my career would be complete without a victory at home,” he said.

“I’ve been close on a few occasions and would love it to be able to hold up a tournament trophy here in Australia.”

His many fans around the country would love to see that too.