Jason Day says the bar in major golf has risen considerably since when he first came on the scene in 2006. Winning has become a lot harder and that has pushed the world number one to continue to work harder, both on and off the course in order to secure results.

Day’s victory at Whistling Straits last year was his first in a major. He has since finished tied 10th in the Masters, tied ninth in the US Open and tied 22nd at The Open in a season disrupted by illness and injury. 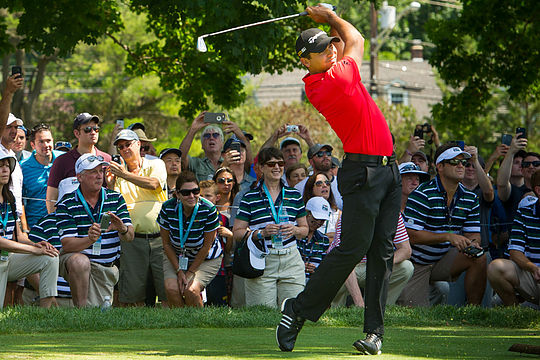 Jason Day during his practice round at the 2016 PGA Championship (Credit: Anthony Powter)

Being a major winner has changed a number of things and with the threat of the next generation of young guns taking his mantle, Day is not stepping aside easily.

“Obviously goals and things have changed since winning the major championship, and yeah, I need to kind of re-evaluate things and go from there,” said Day this morning at his first press conference since arriving at Baltusrol.

“I think the bar’s been raised [with the majors] ever since Tiger Woods. I think everyone expects if you’re in the lead or if you’re a favourite to win, they expect you to win, and if you don’t, then you’re in a slump.”

Day has won seven times since last July and he’s finished in the top 10 in five of the past six majors. The PGA Championship setups must suit Day’s game with 11 of his 26 rounds in the 60s at the majors coming at this event.

“It’s very, very difficult to win golf tournaments,” says Day. “Golf is a very difficult game, on top of trying to manage all the mental parts of the game as well. Once again the competition has got tougher.”

Major championships bring a different standard of play, particularly given 98 of the world’s top 100 are competing this week.

“It just goes to show how stiff the competition has gotten over the years that I’ve been out here,” remarks Day.

“And then on top of it, the guys are just younger and stronger and fitter and faster, and they are just long out there. So just the competition is really, really tough right now.”

Day recognises he needs to keep above the curve to retain his world number 1 status, a mark that he’s not keen to let go.

“If you don’t stay one step ahead of the young guys, it’s easy to get left behind,” says Day. “So I’m kind of coming into my prime now, and I’m hoping to stay there for awhile.”