Jason Day: My Time Will Come

Australia’s Jason Day walked onto 11th tee at Merion Golf Club with a share of the US Open lead, just two months after holding a two-shot advantage with three holes to play at the Masters in Augusta.

The weight of a nation was on this 25-year-old’s broad shoulders as Day was aiming to record Australian back-to-back majors after Adam Scott’s win in April. 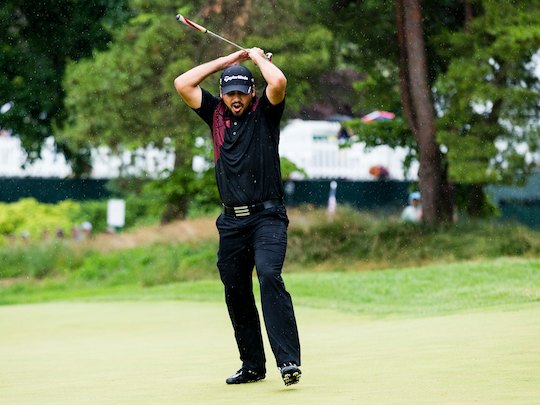 Jason Day reacts to missing a birdie on the 15th green during the final round of the 2013 US Open (Credit: USGA/Michael Cohen)

A loose tee shot followed by some sensational scrambling resulted in a bogey and slowed Day’s momentum – just like the flown mid-iron he hit over the 16th at Augusta at the Masters.

For a second occasion, Day would finish runner-up at a US Open, arguably the most challenging and difficult of the majors to win

He had also finished runner-up at the 2011 Masters on his way to breaking into the world’s top-10 for the first time in July on that year when he rose as high as seventh.

But the most positive aspect to come from his efforts on the weekend at Merion is that Day heads to next month’s Open Championship at Muirfield as the only player on tour to be in the top-10 of both majors this year.

“I think I’ve just got to keep putting myself in position to win,” said the world number 16 at his press conference on Sunday.

“I feel that my game is in a really good spot right now. I’m doing the right things. I’m doing the little things that count. I’ve been close so many times now in majors, especially at a young age, which is nice.”

Day sees himself as young enough to have plenty more chances at the majors and, just as importantly, mature enough to win these bigger events.

“You’ve got to understand that Scotty is in his young 30s and same with Rosie, I guess,” says Day.

“I’m still 25. I turn 26 at the end of the year. I’ve got plenty of majors to play in and hopefully I can keep doing the same as I’m doing, and hopefully win one soon.”

Asked when it would be his turn to win a major at Sunday’s post round interview, Day’s response was simple.

“It totally depends on the play, totally depends on me,” he said. “If I want it enough and I’m willing to do the hard work and practice and keep myself dedicated, I think it will happen. If I slack off and don’t do the work then it won’t happen. And that’s just plain and simple.”

Day has never been a player to shy away from hard work. As a teenager he attended Queensland’s Hills International College Golf Academy where he met his current coach, caddie and life-time mate, Col Swatton.

Day and Swatton have since forged a formidable team on tour.

“This year has been a positive year for us,” says Day.

Day’s progression to the higher ranks has been nothing short of impressive.

Day won his first Nationwide Tour (Web.com) event in July 2007 at the Legend Financial Group Classic, becoming the youngest man at the time to win on any of the PGA Tour’s three tours at just 19.

At 22, he became the youngest Australian to win on the PGA Tour when he took out the 2010 HP Byron Nelson Championship. Day then gained entry into his first ever major championship at the 2010 Open Championship after Greg Norman withdrew where he went on to make the cut.

Bagging a major appears to be just a matter of time for Day.

“Every goal that I try and accomplish, it’s all the process,” says Day.

“Process, goals, turn into the big goals that you accomplish. And everyone knows that. I’ve just got to keep working hard and doing the little things right. Hopefully, that will get me a major.”