Xander Schauffele and Jason Day were the most likely favourites to get over the line on Sunday but ultimately the winning move came from 35-year-old Jason Kokrak, who fired a final round 8-under 64 to win the CJ Cup by two shots.

Kokrak hadn’t won anywhere on Tour since a pair of titles on the then-Nationwide Tour in 2011. He had gone 232 starts on the PGA Tour without a trophy despite securing six top-three finishes, with the most recent near-miss coming at the 2019 QBE Shootout, an unofficial PGA Tour event, where he opened with a round of 57.

“Being 10 years [since his last win], I definitely had some scar tissue…but I think I knew in my own mind that I was going to get it done, it was just a matter of time of me getting out of my own way and letting it happen,” Kokrak said.

“It was very nice to come up 18 and have a one‑shot lead. Xander’s a great player, he’s eighth in the world or something like that and a proven Tour winner. To solidify my first win here against a great player like that makes it a little more special.”

Despite a round of 66, Xander Schauffele finished where he started in second place and two shots short shy of Kokrak. An exhausted Tyrrell Hatton, who won the BMW PGA Championship in the UK last week and made a mad dash across the Atlantic to play in Las Vegas, shared third place on 17-under alongside overnight leader Russell Henley.

Jason Day’s tilt came to a sudden halt with a twinge in his neck on the range turning into something far worse as he headed for the first tee. The Queenslander only made it to the second hole before having to walk off the course. 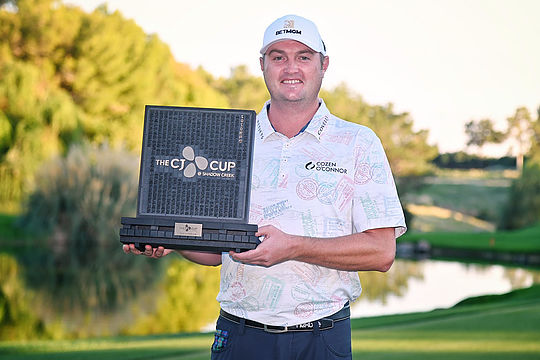 Although Day is confident he will be in shape for this Thursday’s ZOZO Championship.

“My back had been a little jammed up and hurting most of the week so I think maybe I did something to my neck while trying to compensate for that.”

“Hopefully it won’t be too bad and I’ll be back next week. It just sucks to have it happen any time but especially when you have a chance to win,” said Day, who entered the final round in a share of 6th place.

Day’s withdrawal meant Cameron Smith took out the title for best Aussie this week in outright 11th while Marc Leishman fell away on day four with a 75 to share 52nd place.

The Tour now heads to California for the ZOZO Championship where Tiger Woods will defend the title he won in Japan last year at the inaugural event.