Thailand’s Jazz Janewattananond found his winning rhythm when he closed with a six-under-par 65 to take home the SMBC Singapore Open trophy for his third Asian Tour title and also seal his passage to The Open on Sunday.

The 23-year-old arrived in Singapore on the back of a rich vein of form to establish himself as one of the genuine contenders for the prestigious SMBC Singapore Open trophy at the start of the week. 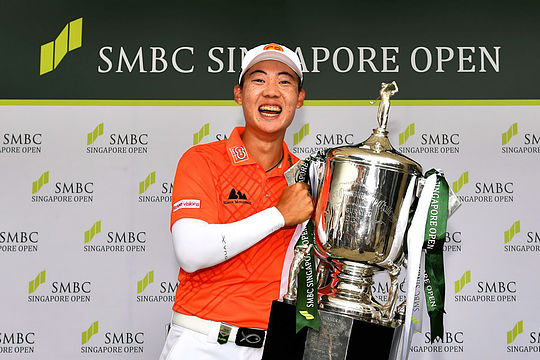 He did not disappoint as he shrugged off the challenges of a host of quality players including Sergio Garcia, Paul Casey and Davis Love III to become the third Thai after Thaworn Wiratchant (2001) and Prayad Marksaeng (2017) to lift his third Asian Tour title with a winning total of 18-under-par 266.

Casey surmounted a strong challenge by signing for a 65 but it was never going to be enough to catch Jazz, who was unstoppable on the Sunday afternoon at the Sentosa Golf Club.

The Englishman had to settle for a share of second place alongside overnight leader Japan’s Yoshinori Fujimoto, a two-time winner on the Japan Tour.

England’s Matthew Fitzpatrick, who was making his debut at the SMBC Singapore Open, closed with a 69 to take outright fourth place while Thailand’s Promm Meesawat and Korea’s Doyeob Mun share not only fifth place but will also make their way together to Royal Portrush in July.

The 2019 SMBC Singapore Open was part of The Open Qualifying Series for the third consecutive year where the leading four players (not otherwise exempt) who finish in the top-12 and ties on the final leaderboard will earn coveted spots at the 148th Open at Royal Portrush Golf Club in Northern Ireland from July 18-21.

Jake Higginbottom and Won Joon Lee took out the top honours for the Australians in the field, finishing in a tie for 18th place at 5-under. Travis Smyth was another shot back in a tie for 24th.