Held on Good Friday each year, the event raises money for the Good Friday Appeal with all funds going to the Royal Children’s Hospital in Melbourne. 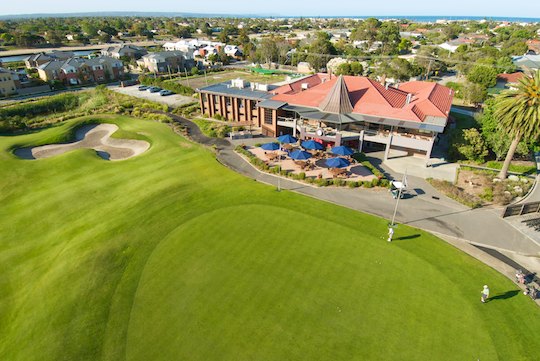 “We had a morning field and an afternoon field and the field was full and it was a great day,” organiser Harriet Howe said.

“We closed entries prior to the closing date, so it’s very popular.”

Players competed in teams of four in an ambrose format and this year’s event raised more than $15,000.

Jeff Crouch was the director of the Good Friday Appeal at the Royal Children’s Hospital for 21 years.

He was also a VFL premiership field umpire who umpired five grand finals in the 1960s and was also voted the Victorian Father Of The Year in 1989.

He passed away in August 1994, two days before his 60th birthday.

Moncrieff, a 1976 and 1978 VFL Premiership player with Hawthorn, said Crouch was an affable person on and off the football field.

“People who knew Jeff remember him as just being a great bloke,” Moncrieff said.

“Jeff had a rare quality for an umpire in that he had an excellent rapport with the football players he umpired.”

In 1996, Jeff Crouch was inducted into the Australian Football Hall of Fame. In his youth, he was an accomplished junior footballer who played in the 1953 Melbourne Under 19 VFL Premiership side.

Moncrieff encouraged those who haven’t participated in the Jeff Crouch Memorial Trophy to buck the trend.

“Everyone enjoys a fun day and once you’ve attended, you tend to keep coming back, year after year.”