Jin Jeong put the seal on a remarkable victory in the ISPS HANDA Perth International by defeating England’s Ross Fisher in a sudden-death play-off to win a dream ticket to The European Tour.

The 23-year-old Korean started the day one behind home favourite Brody Ninyette, but made a nightmare start to his final round at Lake Karrinyup with a four-putt double bogey before recovering to shoot a three under par 69 and match Fisher’s ten under clubhouse target. 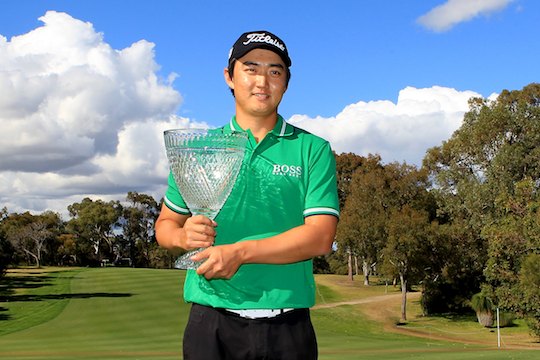 Birdies at the fourth and fifth atoned for Jeong’s early blunder, but it was only when Ninyette dropped his first shot of the day at the 13th that the Australian was caught.

Jeong made important par putts at the 16th and 17th as Ninyette’s challenge faded, but when Fisher hit his tee shot to within a foot at the 17th and birdied the two were tied and neither could birdie the last.

On their return down the 18th for the first play-off hole Fisher caught a flyer with his approach and went through the green, leaving Jeong two putts to sew up the title.

“I was nervous, I was shaking but I controlled myself pretty well all day I thought,” said former World Amateur Number One Jeong. “I don’t know what I’ve done to be honest.

“I was struggling quite a bit when I was turning pro, but it was going to happen in the learning circuit I guess.

“I had played play-offs in mini tour events, but playing with Ross Fisher, he’s one of my heroes. Playing with him in the play-off, it was unbelievable.”

Jeong, who has featured on The Challenge Tour this season, had recently progressed through the First Stage of The European Tour Qualifying School, but now earns a two-year exemption to The European Tour.

“I was going to go back to Q School Second Stage the week after next but I guess I don’t have to anymore,” he added.

Former Ryder Cup star Fisher consoled himself with a runner-up cheque that sees him climb into the top 60 of The Race to Dubai and should qualify him for the DP World Tour Championship.

“Obviously it would have been lovely to have come here and won, but that’s golf,” said Fisher, who carded a closing 68.

“Unfortunately I came up a little bit short, but I can be very pleased the way I played today. I hung in there really well; it was always going to be tough.

“There are some good names up there and I knew I needed to just play really well. I felt like I did that. Hats off to Jin for winning his first professional tournament.”

As Jin celebrated his life-changing victory, there was also joy for Peter Lawrie, whose closing two under par 70 was good enough to earn him a share of 18th spot on three under and win enough money to move into the top 110 in The Race to Dubai and keep his status on The European Tour for next season.

“It was a pretty solid day. I wasn’t hitting it that well on the range and my warm up wasn’t too good,” said Ninyette.

“I thought my course management was good enough to get me in. My putter failed me the last few holes, that was it.”

“Leading into the week, if somebody told me I’d be tied third or fourth, I’d be stoked.

“My main objective from this tournament onwards was trying to save my card for next year so I’m pretty happy,” added Ninyette who is now second on the PGA Tour of Australasia Order of Merit.

Finishing outright sixth on 7-under 281 was hometown favourite Brett Rumford. While a shot further back was Joel Sjoholm (SWE), Richard Finch (ENG) and JB Hansen (DK). Rounding out the top-10 were Sweden’s Peter Hedblom and Fredrik Andersson Hed.