South Korea’s Eun-Hee Ji won the Bank of Hope LPGA Match Play on Sunday for a spot in the US Women’s Open, beating Japan’s Ayaka Furue 3&2 on the LPGA Tour.

It was Ji’s sixth LPGA Tour win and her first since 2019. Ji also earns the last spot into this week’s US Women’s Open at Pine Needles, a title she won in 2009. 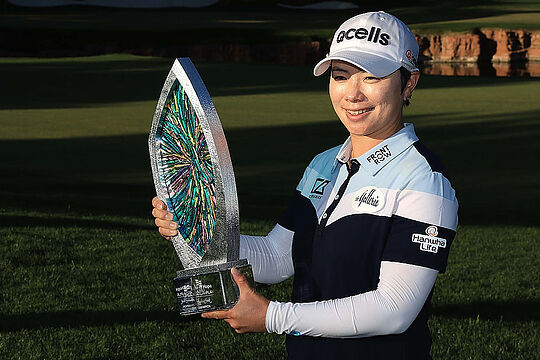 “It’s still surreal and hasn’t sunk in,” said Ji. “I think it’ll hit me once I go there next week. Hopefully I can continue this week’s momentum into next week.”

Both the semi-finals and finals were played on Sunday. Ji beat Andrea Lee 4&3 while Furue edged Lilia Vu 2&1 in the semi-finals. Vu then defeated Lee 3&2 in the third-place match. Ji, 36, finished the week 6-0-1 across seven matches.

At 36-years-old, Ji is the oldest South Korean winner in LPGA Tour history. Coming in to last week’s tournament she was ranked No. 83 in the world and seeded 36th out of the 64 players in the field but now moves to 55th with her victory.

Also making her return to the US Open will be Nelly Korda, who recently announced her return from a blood clot. Korda is coming off a stellar 2021 season, where she captured four titles, including her first major title at the KPMG Women’s PGA Championship.

The LPGA will host two of its five major championships over the next four weeks, with the US Women’s Open at Pine Needles teeing off this Thursday and the KPMG Women’s PGA Championship beginning June 23 at Congressional Golf Club.