Miguel Angel Jimenez closed with a 7-under 65 on Sunday for his second win in three Champions Tour starts this season when he took out the Cologuard Classic with a four stroke victory over American Woody Austin and Germany’s Bernhard Langer.

The 58-year-old Spaniard won the season-opening Mitsubishi Electric Championship at Hualalai in Hawaii and was fifth last week at the Chubb Classic in Florida. 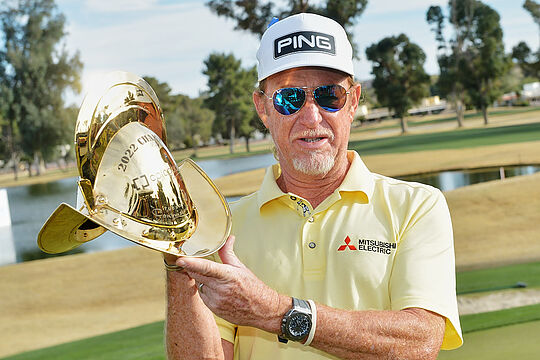 In the final round, Jimenez was out in 32 having begun the opening two holes with a birdie and an eagle and closed with a 33, including an ace on the par 3, 14th, which was his second for the tournament following a hole-in-one at the 7th in the opening round.

The victory was Jimenez’s 12th on the Champions Tour as he closed with an easy two-putt par for the victory. He finished fifth at the event last year.

“I’ve been there several times here, been close the last couple of years I have played this tournament,” said Jimenez. “My game was very good, solid.”

Jimenez sits on top of the money list with US$668,795 in earnings from three events this season and some US$200,000 in front of reigning Charles Schwab Cup holder Bernhard Langer who has pocketed US$436,500 to date.

Rod Pampling finished the best of the Australians in a share of 6th position at 9-under-par, with Stuart Appleby equal 29th at 3-under-par and Stephen Leaney at even par an in a share of 43rd position.

Pampling currently sits 16th on the money list with earnings of US$90,088 from three starts.

Robert Allenby and John Senden rounded out the remaining Aussies in the field.